Welcome from all at the Parish Council.

PC are made up from elected volunteers who give up their own time in order to improve Husthwaite Village life.The PC are commited to enhancing all areas of the community for all members of the community.

Parish Council Meetings are held on the third Tuesday in January, March, May, July, September and November. All meetings are at 7.30 EXCEPT May and November which are 7.0pm.
Meetings will be held at Husthwaite Village Hall.

Carol Fenwick: Council Chair. I was born and raised in Husthwaite, as was my husband Rick. We live at Inglenook and have three children Lisa-Marie, Michelle and Alex. For the last 30 years I have been employed full time as a clerical supervisor and budget manager and I also do voluntary work in a local charity shop. I joined the Parish Council in May 1999 and have been Chair for a number of years. I represent the Parish Council as a trustee on the Village Hall Committee and on the Constance Elizabeth Beckwith Trust. In addition I am responsible for streetlights, recreation area inspections and risk assessments and I am a Husthwaite Neighbourhood Watch Co-ordinator.
Tel: 01347 868 479

Elaine Smith: Vice-Chair. I came to live in Husthwaite in 1979 the year after David and I were married. His family have farmed at Baxby for four generations, and our son has grown up here, as did David and his father before him. I first became a member of the parish council in 1992, was for 3 years in the Chair, and presently represent the Council on the Yorkshire local Councils' Association and at liaison meetings with Hambleton District Council.
We treasure our home, the farm and its surroundings, but particularly appreciate being part of a community where people support each other, and where neighbourliness still survives.
I see the imposition of urban values and greater control 'from a distance' as the greatest threats to many of the things we in Husthwaite value. It is therefore important that the Parish Council promotes the principal of 'government from the bottom up', and ensures that the views of the people we represent are heard.
Tel: 01347 868 572

Barney Smith. I was born and raised in Husthwaite and my family has been at Baxby Manor for five generations, (the sixth has now arrived!). I attended Husthwaite Primary School and went to Ampleforth College.
I love to travel and spent quite a few years travelling the world, but I always looked forward to coming home. I have Husthwaite at my heart and want to make a difference, not just for now but for future generations and my children. I live at Baxby with my two sons Felix and Rufus. I am self employed and am the owner of The Hideaway camping and glamping campsite at Baxby Manor.
Tel: 01347 869 094

Craig Colton
I am married to Lynn, have 3 children Rob (18) Rebecca (16) and Alex (13), along with two dogs.  We moved into Husthwaite July 2013, from Southampton.  I work in Insurance for Aviva, as MD for the Equity Release business.  As a family we like sport and like to be involved with village life.  I enjoy cycling and have got a few members of the village to join me on weekend cycle (road bike) rides.  I support Leeds United and along with my two boys we are season ticket holders and go to all home games.  Hopefully as a member of the Parish Council I will be able to help and support the village.
Tel: 01347 868092

Ray Alexander
My wife, Lottie, and I moved to Husthwaite three years ago and were immediately struck by the amazing community spirit.  We have taken part in several Husthwaite Players productions and other events at the Village Hall which we see as the heart of the community.  For the nine years (immediately prior to Local Government reorganisation in 1996) I served on Ryedale District Council and my Parish Council.  I decided to offer myself to the Parish Council because I was impressed by the way they responded immediately to the outbreak of Covid 19 by offering help to everyone in Husthwaite. I am semi-retired and still work occasionally as a tour guide in York (Covid permitting).

John Law
I joined the Parish Council in July 2018. I have lived in Husthwaite since 2015 and work in York for DEFRA where I am part of the team designing the new farm support programme which will come in once the UK leaves the EU. I have been a part of some of the village community activities of late, most notably appearing as Cheryl, one of the Ugly Sisters, in the Cinderella Panto in February 2018. I am co-hosting the Husthwaite Talent show later this year and hope to be in forthcoming am-dram productions in the village hall. I am also a member of Easingwold Choir. I am an environmental scientist and am keen to develop some new environmental and conservation initiatives in the village and surrounding area. I live with Pauline Crawford and two mad Springers: Lottie and Pip who you may have seen out and about on the footpaths. I have 3 children: a budding solicitor, an actress and a son still at school in Gloucestershire.
Tel: 01347 868291

Jane Don
I am partner to Simon, mother of two, retired with a background in environmental health, mostly in local government and moved to Husthwaite in 2016.
As a former Justice of the Peace and school governor in the Midlands I now continue to be active in supporting residents as one of your Parish Councillors.
Having both grown up in the North East, moving to Husthwaite felt familiar and comfortable. We appreciate being part of this thriving community and participating in village activities wherever we can.
Tel: 01347 868105


8. Reports from Council Representatives:
Easingwold & Villages Forum: No councillor was able to attend the last meeting on 12th March.
HDC Parish Liaison Meeting: No notification of next meeting received.
Highways: The road sweeper visited the village on 4th February. The PC will request prior notification of future visits to try to limit cars parked at the side of the roads.
Neighbourhood Watch: Following the suspicious incident at St Nicholas Church, the roof is now protected by a camera and sensor system connected to a control room run by an insurance approved security company.
Public Footpaths: JL has surveyed most of the footpaths and will prioritise a maintenance programme for volunteers when the current COVID-19 threat is over.
Recreation Area: The quote from Farm & Land Services to cut and remove the shrub growth from around the perimeter of the Recreation Area was accepted by the PC. CF will request quotes from three sources for the repainting of the MUGA surface. Action: CF
Street Lighting: Light number 2 in High Street has been reported again as NOT working and light number 12 on The Nookin is also not working.
Village Hall: All forthcoming events have been cancelled due to the Coronavirus crisis. Quotes to weatherproof the Bier House roof will be requested from M Duffield, York Guttering & Roofing and A&S Roofing.
YLCA: All Clerks and Councillors have been issued with new passwords for the new YLCA website which launched at the end of January.
9. Reports from County & District Councillors: As no councillors were in attendance, no reports were given.
10. Date & Time of next Meeting: The next meeting will (provisionally) be held on Tuesday 26th May 2020 after the Annual Meeting which takes place at 7:00pm in Husthwaite Village Hall. 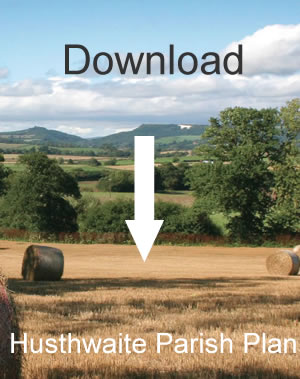