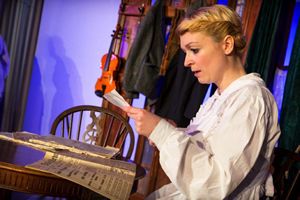 Husthwaite worked hard to remember the Great War. A hundred years after the originals, the village recreated one of the summer parties that took place all around Britain after war ended in 1918 and had a remarkable short play in the middle of it. In November this year, the end of fighting was celebrated with a glorious firework display on Beacon Bank and a party afterwards.
At the end of October, Badapple Theatre Company from Green Hammerton brought their play "Thankful Village" to Husthwaite.

Three village women, played by Sarah Raine, Zoe Land (pictured) and Frances Tither**, told us the story of their lives after the men had gone to war. And occasionally they portrayed the men, away in the trenches.

The hall was completely full and you could hear a pin drop. We became completely involved in the hope and tragedy of that conflict. All the men came back. One of the three women became a volunteer nurse, described what she saw graphically....and died in service.

The music really surprised us. The women played instruments and sang in wonderful poignant harmony. Such a good night. They have a new play in preparation for Spring 2019. We'll try to get them back.

To complete the story, Thankful Villages were those fortunate communities whose men all returned home after the war. Cundall is one of those near us.
Andrew Coulthard
** Frances Tither played Emmeline Pankhurst, a key figure in the campaign for women's right to vote in the same period as the play, in the BBC One TV play this year.