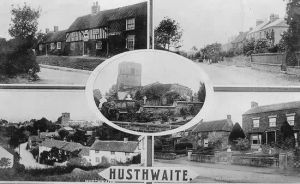 Our village community has lost one of the very best of men. Mark was indeed a devoted family man. He was a loving husband of Margaret, a caring and supportive father to Anthony, Elizabeth, Becky and Heidi, and he adored his four grandchildren. He was especially proud of Margaret's professional qualification and work.

But in his own field he was unsurpassed. His knowledge, skill and ability in practical matters were outstanding. There was simply nothing to which he could not, and did not, turn his hand or for which he did not have an ingenious idea: from roof repairs to plumbing, electrics, all kinds of building work, mechanical particularly motor engineering and welding. Inventive to an amazing degree, when with such back pain that even the strongest injections afforded no relief, he fashioned a leather corset with chains to hang from the cross bar of the children's swing, which of course he had also made. Stepping off the seat and letting his lower body weight act as traction for increasing periods did the trick. And then there was Mark the mole catcher. Unless you saw his unique and humane method you would not believe it.

He was imaginative too, and creative, with a real sense of humour. No one who was privileged to see his immaculate and beautifully designed garden in full bloom, could fail to smile at the man in the top hat, smoking a pipe and holding a pitchfork - one of Mark's many sculptures in metal.
What can I say about his gardening skills? I understand his interest stemmed originally from time spent as a small boy with his Grandfather Hutchinson. Then even as a very young man, when he worked on farms in the area, he had ambition to set himself up with his own gardening business. He read books on the subject and was always keen to identify a specific plant or shrub, an interest he maintained. So, 30 years ago, he began on his own, accumulating, as the demand for his services in the village rapidly increased, a vast knowledge from which many of us have benefited in abundance.

His strength and energy were boundless. He worked tirelessly all the hours of the day. He was conscientious to a degree. But he also had a poetic feel for the natural world around him and, on occasion, expressed a deeply sensitive appreciation of the lovely setting in which we live. He was a true countryman.

Husthwaite Open Gardens have become increasingly popular with visitors from far and wide, and residents have accepted the plaudits due, knowing well who really deserved the praise. Our church grounds have been carefully tended, the grass mown and the flower beds planted by him for years. It is said no one is indispensible. Here was one who will prove irreplaceable.