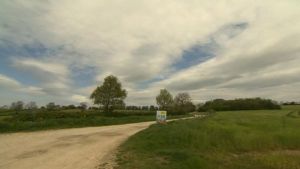 Following the HVH fracking meeting held in December which many attended, several members of the community (Mark Gambles, Ian Harper, Philip Hewitson, Will Mowatt, Brian Watts & Craig Colton) went on a visit to Third Energy's sites in North Yorkshire to get a look ourselves at the potential implications for fracking in our area.

Third Energy are an independent operator with conventional gas wells already in operation in North Yorkshire around the Pickering area and they have applied for permission to "Frack" one of these wells near to the village of Kirby Misperton in Ryedale. It is worth noting that Third Energy (or their predessors) have had operations of the conventional type within North Yorkshire for around 20 years, so a lot of the disruption and infra-structure associated with drilling for gas and laying gas and water pipelines etc was carried out many years ago.

Third Energy kindly gave us a full 2.5 hour presentation followed by visits to a couple of their drilling well sites, including the site they are seeking to get permission to frack.(more info).

Key parts of the presentation were focused on
• What are the implications for water safety and usage during fracking, including any risk and concerns around the "water aquifer", ie where we get drinking water sourced from.
• What are the risk with any chemicals used in the Fracking process
• What are the risks of Seismic activity (as seen in the only current fracking trial done in the UK)
• What are the noise pollution issues and facts around it
• What are the traffic issues, and are those unique to Kirby Misperton
• What are the likely visual impacts on the countryside including how many "Well pads" are potential to spring up?

Water
• Around 4000 cubic meters of water c1m Gallons (or 2 full size Olympic swimming pools) will be used to do the frack in Kirby Misperton, this will be delivered to the drilling site via underground pipe. If delivered by lorry this would be up to 150 lorries in & out of a site.
• Around 40% of the fracking fluid is returned to the surface, and this will need to be taken away by lorry for treatment as it will contain some chemicals used in the process and some radiation picked up from the deep rock formations, so depending on tanker size this will be 60 lorries in & out of the site.
• The drilling is undertaken some 1.5 to 2 miles below the earths surface and over 1 mile below any aquifer, with layers of impermeable rock and salts between the fracking area and the water aquifer. therefore the risk is around pipe construction and maintenance as the gas is returned to the surface under pressure. The construction of 5-6 concentric steel pipes encased in concrete are the high quality controls that are put in place to prevent leakage and have been used safely for many years on conventional drilling sites.
Fracking Fluids & Chemicals
• Third Energy presented to us the chemicals they were adding to the water (see presentation) to enable the Fracking to be effective and although they have 8 chemicals that would be harmful in large quantities. However, the concentrations in the fracking mixture were believed by Third Energy to be very safe, this is something that regulations will need to review and answer.

Earth Quake Risk
• There was historically a site in Lancashire that caused a slight earth tremor (2.3 at the local site) this was down to failing to do appropriate 3d seismic studies which are now mandatory for any drilling. There are also now guidelines that require monitors to show any activity above 0.5 and all activity needs to stop immediately if this happens. For comparison 3rd Energy said standing next to a train line as a local commuter train passes registers around 2.5.
Noise Pollution
• Fracking will occur at the sites in Kirby Misperton for a very short period, Third Energy suggest to do the fracking pilot they are looking to do they will only need to "Frack" for around 12 hours in total. Clearly this is small because of the size of the site the method of fracking they are using etc, On bigger sites with more activity this could increase to 200-300 hours of noise albeit likely to be in short bursts of activity and not continuous. Noise abatement is a key issue and the regulations and rules need to be in place to ensure noise is controlled on the site, acoustic modelling is in place with an aim of restricting noise at local village to be no more than 55db - equivalent to standing next to a busy street.
Traffic issue
• These will be very site specific, in Kirby Misperton the prediction is for 48 vehicle movements (24 in and 24 out) a day for a period of 2 weeks, around 2% of the local village traffic currently seen, as discussed earlier this is highly reduced because of the infrastructure already in place.
Visual Impacts
• During construction and initial drilling the site will be visible, this is likely to be 6 months on a new site, at Kirby Misperton this drilling has already taken place and as you may have seen on the news this week, and attached picture the site is very discreet once completed. The drilling site itself was around 1-2 football pitches in size and had 3 wells drilled on it.
• Thrid Energy's view was that they would expect around 6-10 such "pads" for each licence block to enable full production. We estimate that this is roughly one site for each 5 mile x 5 miles area.

Block SE57 or to bring this closer to home the area or licence block in which we live, is not actually been purchased by Third Energy it has been purchased by INEOS (web site http://www.ineos.com/businesses/ineos-upstream/our-business/ ). As a result of this we are now planning two things, one is to get a public meeting organised in the Village Hall with INEOS so they can set out their plans for SE57, and secondly to give you an anti fracking perspective we also aim to meet up with and discuss the issues with "Frack Free Rydale" an anti fracking group established to prevent fracking in Rydale.

If anyone has any thought or questions please feel free to contact myself Craig Colton on craigcolton@btinternet.com