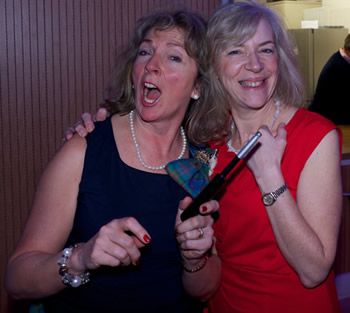 Burn's Night 2016 was a slimmed down version, unlike some of us who had to rely on cummerbunds and discreet lighting to mask the excesses of December.

Our initial entry to the hall did not bode well. Those of us who had begun the evening in someone else's house became involved in an unseemly and rather desperate rush to fill a dance card. Any sense of discrimination vanished in face of being a rather obvious wallflower.

Once the evening settled down it became immediately apparent how much thought and effort had gone into the event. The hall looked terrific. The Saltire was proudly draped at one end of the hall and the pennants strung around the ceiling echoed this. Lighting was subdued and the tables were immaculately presented.

As usual, the dance cards and free pencils were on tables that had a slightly different identification system to previous years. Scottish historic and sporting triumphs had, in the past, differentiated tables. It would be churlish to suggest that the list had become exhausted but this year the theme was Scottish musicians.

For all of us born south of the border, what makes this a most memorable occasion is being invited to take part in someone else's traditional celebration. Like being on holiday and eating sheep's eyes in a Mongolian Yurt.

The ceremony began with Mike Almond's bagpipes leading the haggis to its ritual slaughter, closely followed by Will Mowatt and Brian Watt.
On the stage, Will's Address to the Haggis was a triumph of memory and menace. The cutting of the Haggis was such that it could never fight back. The ferocity was reminiscent of some Scandi Noir we have on our TV but unfortunately there was an absence of subtitles for the address. 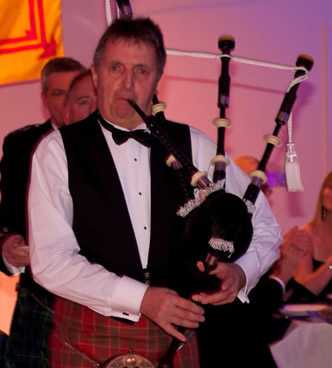 It seems strange that such basic fare as Neeps, Tatties and Haggis still tastes as good as it does. It does however, so thanks to those from Scotch Corner who cooked it.
As usual, the food guests brought was exceptional. There must be special mention to the Couscous in the blue bowl. If there were prizes to award, then...

The speeches came next. Previous years have taught us to expect the unexpected and this year was no different. Sarah Black's sustained rhyming praise of the ‘laddies' was enthralling. Nick Cuthbert's rather enigmatic thanks to the ‘lassies' consisted of a witty and humorous comparison of Bristolian dialect to Scottish dialect.
That both were uniformly incomprehensible added to the laughter.
It takes some nerve to do this and thanks to both of them.

Smaller numbers this year enabled the dancing to flow smoothly. Brian Watt's patience, calm and controlled calling led us through many more dances than previously. The Borrowdale Exchange lacked, somewhat disappointingly, the usual mayhem of previous years. It seems we are all getting better.

Normally, the credits roll too quickly on TV. Here we all have time to read whom we must thank for such a good evening:

Will and Sheila Mowatt and Brian and Elaine Watt organise and drive this event, so huge thanks to them.

Special thanks must go to Oliver and Jeremy who worked tirelessly doing the unglamorous cleaning and clearing jobs as well as managing the bar.

Jan Janiurek spent much of the night looking through a viewfinder and his photos can be viewed here.

The following day the Aspinall's and Cuthberts helped to clear up Sunday Morning.