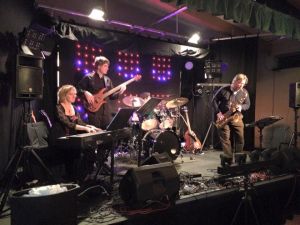 We trudged up the Nookin, bearing gifts from afar. Well, a carrot and chick pea salad, actually. The village hall shone-out in the dark night and as we approached: hark, is that the sound of a jazz saxophone? We pulled the door open and were greeted by a blast of warm, comforting air. People were sitting round candle-lit tables, chatting, drinking and enjoying the music. Had we been transported to Ronnie Scott's Jazz Club?
No. These were definitely Husthwaite folk, ninety-three of them and they were being entertained by Oliver Pickstone, Gila Robinson and friends. Their accomplished renditions of jazz classics settled us all into a happy mood. Young, old and in-between were all there; people who have lived in the village for decades mixing with new folk, swopping stories, smiling and queuing at the bar to sample the cask of Treboom ale.
All too soon the music stopped, but then it was the turn of Thomas Nixon's band to quicken the tempo and turn-up the decibels. Did I hear "The Boys Are Back In Town"? Surely Thomas wasn't even thought of in 1976 when Thin Lizzy were singing it on Top of the Pops! All the same it was nice to have you back in town, Thomas and Vicky.
Time for food. Sheila Mowatt and her helpers ushered us into the committee room, a table at a time, to be greeted with a veritable feast. Every combination of quiche and salad you could imagine. Then, a dessert table groaning under the weight of so many calories. Who said cream's not fattening?
Meanwhile Will Mowatt was collecting up the quiz entries. Can you find festive words based on the letters of our dear village name? The letter U floored our table's entry. "Under the mistletoe" has too many words. "Underpants", the usual Christmas present from Grandma didn't do much better. Luckily we were put out of our misery when Brian Watt turned on his imitation flame throwers and A Bit of a Gamble struck up a Beatles tune. Previously, as Mark Gambles had poured my pint, he had complained that he can't sing for two hours solid. I wonder how he got on?
We never found out, because the band was still going strong as we left. However, we have it on good authority that the fire alarm didn't go off this time, despite Brian's latest toys. All in all, it was an excellent Husthwaite evening, a tribute to the hard-working village hall committee, organisers and performers. No holly, mistletoe, carols or cotton wool beards, but despite that, the 2015 Husthwaite Christmas Party will cement the new village hall in our happy memories, alongside similar events in the old one.