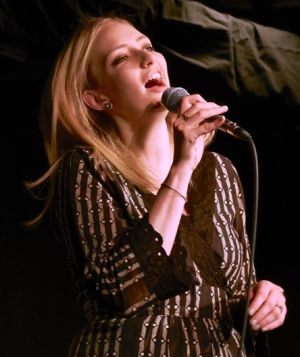 As the temperature outside plummeted, we in the village hall were warmed and inspired by the fabulous Anya Faull and her superb band. The energy and pure enjoyment in their music making was clear and very infectious.

Anya's gorgeous voice has such expressive depth in the more soulful ballads and incredible dexterity in the upbeat numbers. Her vocal range is extensive but always sweet and her take on the jazz standards is creative and refreshing.

She and two of the band members are recent jazz graduates of Leeds School of Music. Martin Longhawn is a brilliant pianist, very much in demand over the North and he also played recently in the London Jazz Festival. His sensitive and melodic soloing was always captivating and the rapport between Martin and Tim Carter, drummer, was a delight to witness. Tim's solos were mesmerising -

I'm not usually a fan of drum solos but he had me on the edge of my seat. Martin and Tim are also half of the Firebird Quartet, a well known modern jazz quartet.

Pietro Lusvardi is the final member of the band on bass and he is no stranger to our village hall having played here twice before already. He is a very versatile musician who weaves creative magic with the rest of these accomplished performers. Pietro has an extensive background not only in teaching, but also as a performer and composer, covering both classical and jazz. He founded the award winning avant-garde jazz ensemble Gatto Marte which has published ten albums to date.

We have to give thanks to our jazz promoter Oliver Pickstone for bringing these fantastic musicians to our village. He also got up on stage in the second half adding some beautiful tenor sax to the mix which blended well and contrasted to Anya's vocals.

Another inspiring night out in Husthwaite Village Hall.
Thanks to everyone who helped to make it happen.
We hope to see Anya Faull and her wonderful band back again next year.