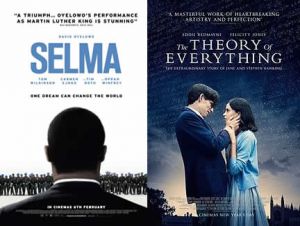 June 18th "The Theory of Everything" Cert 12A -The story of the most brilliant and celebrated physicist of our time, Stephen Hawking, and Jane Wilde the arts student he fell in love with whilst studying at Cambridge.

Little was expected from Stephen Hawking, a bright but shiftless student given just two years to live following the diagnosis of a fatal illness at 21 years of age.

Galvanized by the love of fellow Cambridge student, he went on to be called the successor to Einstein, as well as a husband and father to their three children.

The epic march from Selma to Montgomery culminated in President Johnson signing the Voting Rights Act of 1965, one of the most significant victories for the civil rights movement.

The film draws inspiration and power from the life and death of Dr Martin Luther King but doesn't ignore how far we still remain from the ideals his work embodied.