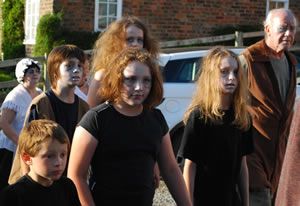 What's the difference between a play and a community play? Drovers' Road, by local playwright Peter Spafford directed by Robin Walton, surprised full houses in the new village hall.

Robin prepared the way by involving Husthwaite's community organisations. Members of the Orchard Village Club, many of them with long memories, sat down to their monthly gathering amid the dress rehearsal preparations. They saw the performers putting on their costumes, witnessed the make-up team at work and listened as the play's songs were given a final run-through.
Husthwaite Primary School children were taught the songs when Robin and David Pike visited their classrooms. Some of the children accepted the challenge to be rounded up from their seats in the audience and driven onto the stage by noisy cattle drovers. They then joined in the drovers' songs.
The Husthwaite Ramblers Group gave two of their monthly outings to the production, making visits to the Hambleton Drove Road. They sat among the ghostly ruins of the ancient droving pub, the Limekiln Inn high on Kepwick Moor, and they were given a dedicated tour of the remarkable chapel at Scotch Corner on the hillside close to the White Horse. This is said to have been the scene of the Battle of Byland Abbey (1322) when Robert the Bruce humiliated the starved army of Edward II. A scene in Drovers' Road re-enacts the countdown to this dark moment in the history of our hills..
Finally, and most dramatically, the play began at the village green and Act 1 took place as the cast sang and danced along the Nookin to the hall. Audiences were invited to join in the procession and to take part in the songs and the dancing
My, were we blessed with wonderful weather for this dramatic adventure!
Nobody, but nobody expected what followed in Act II. Some people wondered when the pantomime would begin. It didn't. Others were perhaps waiting for the jolly japes of Husthwaite's recent plays, with ugly sisters, family scandals and hospitals sporting three matrons.
Instead we travelled onto the North York Moors. Night and fog fell on a group of teenage hikers. They were forced to wrap themselves in their sleeping bags and wait for morning. Into their disturbed dreams came the ghosts of the thousands of people who have travelled that road. Up there on the ridge it can be wild and spooky. It was both those things. They watched the ghosts of very scary tormented souls; the bickering and bullying of the Limekiln staff; the noisy banter of the drovers when they arrived with their (primary school) cattle to sweep the girls off their feet with their romantic ways; the young locals who snatched valuables from the dead bodies of the English king's soldiers; the King himself, tormented with guilt as he retreated from the advancing Scots, with bloodshed on both sides.
The spirits of the moor were abroad: Fog, and Stones, Wolf, Moor and Weather. And running steadily on through the play came the spirit of the Road itself.
A tough play to perform?
It was very tough.
The cast were predominantly young and inexperienced. The village's new generation of performers introduced themselves. Rebecca Colton's Laura was very realistic as she struggled with her own fears and the need to provide leadership to her friends. Katie Pickstone was a convincing little thief. Alex Colton and James Sibley were strong and clear in the scene where cattle are traded and the dogs sent back to Scotland. Rory Watt harnessed his bubbling energy as Richie the youngest and most imaginative hiker.
They had lively support by young people from Easingwold and the surrounding villages.
It was vital to have some experience on stage: David Pike powerful as the as tormented King, Catherine Skinner sportingly doing Grandma again, Anne Dowson, the village's favourite shopkeeper with her remarkable stage presence as the Limekiln landlady, Stephen Barker as the menacing Wolf; John Drew as the bad-tempered blacksmith. Zoe Lodge was the flighty spirit of the moorland Weather, and Jane Cluley's Road flowed philosophically through the centuries to become a busy motorway.
The play thrives on its atmospheric effects, conjuring the moods of the Moor, moving from tranquillity to menace. The technical team all took part. John Ovenston and Mike Wells, with an apprentice Edward Dick, added wonderful lighting, video and sound effects. Lynn Colton's costumes were cleverly offset by Elaine Watt's make-up. Robert Colton efficiently managed the backstage continuity.
Some of the audience stayed behind to discuss their bewilderment at the play's ending, especially its absence of a curtain call. Robin explained the writer's concept of a drifting, baffling dream. And that's exactly what the play was intended to achieve.
The writer himself, Peter Spafford, attended the last night. He was delighted by the production and came into the Green Room to congratulate the players.
Byland Media will present their film version of the play in the autumn.
.