Award for the Hideaway! 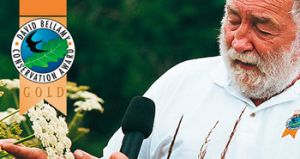 it is with great pleasure that we can announce The Hideaway@Baxby Manor WON GOLD in the David Bellamy Conservation Award Scheme!
The David Bellamy Conservation Award Scheme is one of the longest running green tourism awards in the UK. The idea of the scheme was first sown when David Bellamy gave a talk to members of the camping, caravanning and holiday home park industry in which he gave the audience members a challenge to be part of the environmental solution and not part of the problem. David was then invited to visit many parks and was amazed at the wide range of work that the most forward-thinking owners were doing for the environment. David was so impressed that a partnership was formed between the Conservation Foundation (the environmental organisation that David co-founded to help businesses get involved in conservation) and the British Holiday & Home Parks Association to set up an award scheme.
The parks that take part in the scheme are all regularly assessed by the scheme's team of local wildlife experts. The assessors look at the steps parks are taking to:
Manage their land as a haven for wildlife
Reduce their use of energy, water and other resources
Reduce, reuse and recycle the waste they produce
Support their local communities
The following letter we received was signed by David Bellamy. At the time, of course, the comment about the pub was relevant.

David Bellamy Conservation Award 2013/14
Park: The Hideaway @ Baxby Manor
Award 2013/14 Gold
Message from David Bellamy:
Welcome aboard and straight into gold. Very well done.
I am writing to congratulate you and your team on your fantastic award. You should be very proud of the work you have done to help Britain's wildlife - which, as you'll know, needs all the help it can get at the moment.
I hope that the award provides you with an effective way to let everyone know that you are a champion of ‘all things green' and that it encourages you to strive to do even more for the natural world in the future.
Having read through your assessment, I'd just like to say that I am really delighted by all the you have done so far. I am particularly impressed by your obvious commitment to sustainability and by your plans to put in new planting that encourages wildlife. You commitment to the local community is also shown by the fact that you've helped your local pub boost its profits by 70%. Well done!
As you'll see, your assessor has made a number of suggestions for how you can build on your achievements - I really hope that these comments are useful and that they will help you prioritise and focus your efforts for the coming year. I particularly like Rose's idea about looking at supporting a relevant environmental charity, such as the Bumblebee Conservation Trust or Sustrans.
As I never get tired of saying, the exciting thing about working for wildlife is that there is always something new to do. So please continue your wonderful work and make 2014 your greenest yet.
David Bellamy
BH&HPA President