Evens win against the Odds! 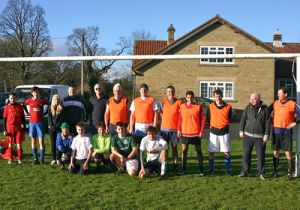 On a very pleasant New Year's morning, Husthwaite's finest football talent headed to Coxwold for the second New Year's Day football challenge. There was some pre-match doubt regarding the condition of the pitch but Husthwaite's very own turf specialist Jeremy Walker was called in for a New Year's Eve inspection. After a quick visit he gave his professional opinion, "It is playable. If you dug a hole it would probably fill with water but there is a good covering of grass."

All photos can be seen here

A new formula was used to select the teams: those born on an even year on one team and those born in an odd year on the other team. Strangely this resulted in 10 on one side and 6 on the other. The Odds generously transferred two of their team to the Evens. Given the youthful make up of the Evens team, this proved to be a big mistake.

The Odds started with Jeremy Walker in goal flanked by the mother and daughter defensive pairing of Jane and Lara. This worked for the early part of the match with Jane and Lara prepared to block the shots (sometimes intentionally) raining in from the Evens.

The inevitable first goal came with the pace and energy of the Evens team gaining them the lead through a long range Alex Fenwick scorcher.

The Odds attacks were infrequent and Mark Kingston in the Evens goal looked commanding and untroubled. The Evens were playing well and the teamwork between Rory Sheard, Calum Mowatt, Reda Bouchaib, Thomas Nixon, Alex Fenwick, Josh Sargeant and Catherine Skinner meant that possession was with the Evens.

Half time came with the Evens 5-0 to the good with additional goals from Calum Mowatt (2), Reda Bouchaib and Josh Sargeant.

Half-time saw Alun Nixon feeling the effects of this being his only game since last year as well as a late night entertaining the locals and celebrating New Year.

In a stunning piece of negotiation, the Odds managed to convince the Evens to rejig the teams. They key change being that the Odds now had a goalie and a goalscorer.
The second half as a result proved to be more even.

The starting Evens line up continued to struggle to trouble the Odds goal.

Martin Gallon managed to keep his shots down but unfortunately the goals proved to be too small for him to hit the target.

A pinpoint corner from Marcus Sheard on to the head of Will Mowatt was, unfortunately, well off target.

Jeremy was seen digging holes to confirm his pre-match analysis.

Lara raced towards the goal line and as she reached it, through her gloves behind the line so they didn't get too dirty.

It was left to Reda Bouchaib to produce the goals bringing the score back to 5-2.

Throughout the half, the new Evens attacking formation of Catherine "Poacher" Skinner and Stephen "Wide Boy" Barker provided a constant threat upfront.

The game was very fairly refereed by Rick Fenwick. He even introduced Fergie time to give the Odds a chance of getting back in the game. However, the Evens used this to their advantage with Calum Mowatt beating Mark Kingston for the first time to finish the match at 6 - 2.

Thanks to everyone including the supporters for coming along and joining in the fun. Suggestions for next year's selection criteria on a postcard please...