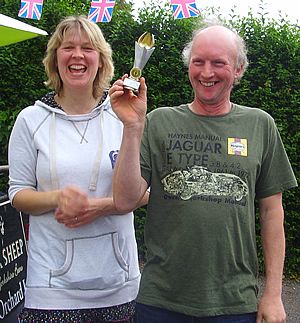 Now that the football premiership is back center stage with its frenzied media accompaniment, of goals gossip and bar and bed room antics.

It seems a distant memory when athletes competed fairly where gold medalists were normal people like us and team GB triumphed above the rest of the world in so many events. Where Great Britain proved its people can still lead the world in organization and planning.

It was against this backdrop of sporting ideals and national euphoria that the Husthwaite Olympics were held. Eager village Olympians (aged 4-70 yrs) descended to the school sporting arena to undergo 8 challenges of endurance skill courage and teamwork.

First of all our steely competitors were charged with overcoming Martin Mountain Gallon in a ‘beat the goalie' penalty shoot out, it was as if he was still wearing his motorcycle armor as he fended the venom of Husthwaite ball strikers. Eventually after much nerve, power and accuracy Nick Januriek rose above the field to take gold in this event.

Next Lawrie hill guided us through the frustratingly difficult world of target golf.  His own skills rubbed off on the competitors as the painfully low scores were recorded.

Throughout history man has pitted himself against beast, from our prehistoric hunter ancestors to the roman gladiators. It is in this world of man versus fish that legendary fictitious yellow pages character J R Hartley and real life Husthwaite legend Mark Fishy Gambles exist. Under Marks confident and relaxed coaching the whole village could have surely dinned on a huge fish supper. It was young Fergus McLanachan who angled himself the river casting gold prize.

Gold medal in basket ball shooting was taken by a young athlete by the name of Darcey Blenkinsop. Husthwaites fastest individuals over 50 meters were Nick Januriek and Sammy Bouchaib.
The course of Husthwaite's long distance competition was as follows. Round to Baxby, over 5 lanes end, up the grueling climb of Highthorn Lane , followed by the back straight sprint which was The Nooking and Low Street . It apears Scottish ancestry and Yorkshire up bringing were the ingredients for gold in this classic event as Calum Mowat and Isla McLanachan were first home to the Orchard Inn.

To stimulate a competitive element for us all we were divided into two teams, Hambleton and Mowbray. Under these hilly banners the team events were fought. Hambleton winning the walking football, Mowbray getting revenge in the rounder's event, the builder's ton bag race was great fun, but failed to produce a winner as both teams crossed the line together.

A fun afternoon and some excellent sporting achievement were rounded off by medals and beer at the Orchard Inn. After the individual results were fed into the master computer Mowbray were declared the overall winners and the team trophy was collected by Mike Barker.

Husthwaite Olympics creator Will Mowat hopes to incorporate elements of this event into a monthly sporting challenge, watch this space for future events.