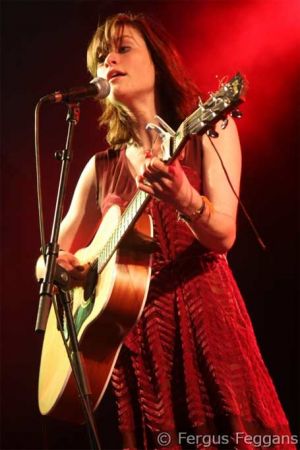 Husthwaite Village Hall has played host to some memorable events over the years, but last Friday evening's concert with Rachel Sermanni will rank as one of the highlights. As part of an extensive UK tour Rachel's appearance in Husthwaite was somehow sandwiched between an appearance and recording at the Edinburgh Festival Fringe for the BBC and her upcoming appearances at the Leeds and then Reading Festivals.

Playing to a full house with visitors from all over the County as well as locals, Rachel's repertoire of her original music and song was delivered with delicate acoustics and a stunning voice, which left the audience spellbound and demanding more at the end of the concert.

Rachel was supported by Issy Zarb, who opened the concert with a selection of songs, many her own composition. Already making regular appearances at local venues (including Elphin Drift) Issy is a young talented local singer/songwriter who will undoubtedly go far.

Thanks are due to the back office team (Vikki Nixon, Stephen Barker, Andrew Coulthard, Mark Gambles, Mike Wells), but particular thanks must go to Alun Nixon for arranging such a high quality performance.