Jubilee at our Churches 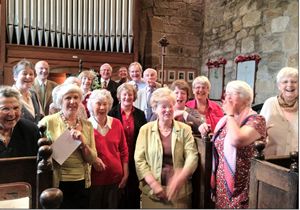 For those who survived the more energetic celebrations (see articles by Alison Turner and Peter Davison) there were yet further Jubilee events.
Saturday saw the Chapel lawn laid out with chairs and tables for a very special Coffee and Chat event with Scones decked out in red (strawberry jam) and white (cream) as well as the usual delicious freshly brewed coffee. Cool weather caused the celebrations to move into the shelter of the Chapel but with no diminution of the enjoyment with a Jubilee theme of Union Flag serviettes, red roses and suitably attired waitresses (see above) .Much laughter and chatter attended this delightful community event organised by the ladies of the chapel. The 30 or so participants look forward to a repeat event soon (Coronation anniversary perhaps?)
The Orchard Village Club Jubilee Party took place in the midst of the History Society Exhibition, so history was brought to life in animated conversations. The pictures linking the Royal events and Husthwaite Village life through the decades evoked many happy memories and recollections, especially for the older people who attended. Everyone enjoyed celebration lunch - Coronation Chicken of course - followed by a cornucopia of cream horns, appropriately decorated with colourful
fruit, fit for the Queen! The meal was prepared on this occasion by Margaret and Malcolm Wride, Gill Allanson and friends.
The two village Churches also planned to celebrate in style, culminating in a special united service attended by over 60 people. It began with a recording of the then Princess Elizabeth's broadcast in 1947 dedicating herself to a life of service to the Commonwealth. Throughout, there were readings 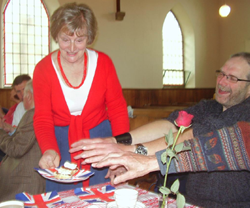 drawn from the Christmas Messages and Thomas Nixon entertained us by recalling what things used to cost 60 years ago - 5p for a litre of petrol! Other readings were taken from the 1953 Coronation Service and familiar hymns sung lustily including of course, the National Anthem. The Phoenix Choir were out in force to sing a half-familiar, half-different arrangement of Jerusalem as well as a rousing chorus of ʽLong Live Elizabethʼ from Merrie England. The service was rounded-off with a celebratory glass of wine or Apple Juice - Husthwaite naturally! - donated by Audrey Raper and Linda Davison.
What a weekend! From the ʽHusthwaite Hobbleʼ, through Tug-o-Wars, Welly Throwing, the Exhibition, the Service of Celebration, Street Party, Jubilee Coffee and Scones, Coronation Chicken and finally Disco - surely everyone in the village will remember the occasion for years to come.
John Ovenston