Jubilee Exhibition at the Village Hall 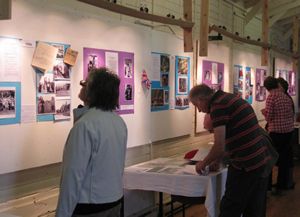 As part of the Queen's Diamond Jubilee celebrations in the village, Angela Ovenston, with various helpers from the History Society, assembled and created a display of photographs and memorabilia loaned by people in the village. This showed six decades of life and times in Husthwaite, alongside six decades of events in Queen Elizabeth's reign.

The exhibition was enjoyed by over 200 people in total, including residents past and present, and stimulated lively reminiscences of village life both then and now. All the children from the village school visited the exhibition on the following Monday.

The listing of key factors for each decade and material displayed on the walls will be retained in an archive, available for future reference. Angela would like to thank Doreen and Malcolm French for their part in assembling the ‘Royal' display, Stephen Barker for all his time and support, and John Ovenston for processing and printing the photographs. Thanks too to Pat Frost (née Drinkhill) who has subsequently been able to identify almost all.