Did we make it? 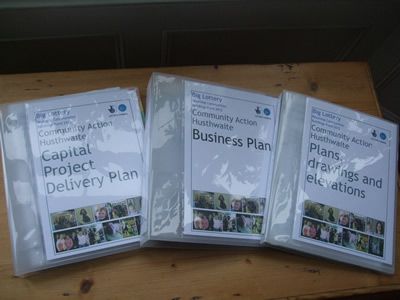 The final part of our bid for a new village hall happened on Tuesday when Andrew Coulthard posted 3Kg of documents to the Lottery.

This was the result of a tremendous amount of hard work by many people in the Village.

The Lottery will consider the bid and announce the decision in October.

If the answer is favourable then we expect building to take place in January 2013.

However, obtaining planning permission by the time the bid went in was imperative and gaining it was no foregone conclusion.

Within the village there were three households who objected and Highways formed a view that parking was an issue.  They also objected to the plan.

The issue therefore went to the planning committee who met to discuss this (and other plans) today, Thursday 19th.  They had previously had a site visit on the preceding Monday.

Four members of the Village Hall committee, Will Mowatt, Andrew Coulthard, Philip Hewitson and Lawrie Hill attended the meeting in support of the proposal.

The planning officer spoke first and gave a fair summary of the case and recommended the committee give consent to the application.  Will Mowatt spoke on behalf of the committee and gave a very good outline of what the project meant to the village.

Councilor Patmore, who has been very supportive, spoke in favour of consent being granted.  Other members spoke highlighting concerns over traffic issues but thought the project merited consent.

After this short debate the members voted unanimously in favour.

Next update in October when the Lottery decide!