HUSTHWAITE KEEPS IT IN THE FAMILY ! 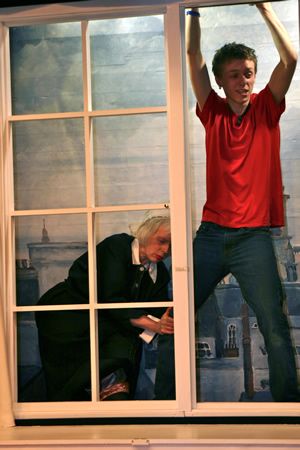 Husthwaite took Ray Cooney's "It Runs In the Family" somewhat literally, with no fewer than four husband and wife teams represented on stage, and several others behind the scenes, all of them delivering a first class production which had the audience laughing from the opening scene to the last curtain-call.

Lawrie Hill excelled as Dr Bonney, including some rather fetching Al Jolson vocals, as he was drawn into an ever-more tangled web of deceit being spun by the desperate Dr Mortimer, played with a wonderful balance of severity and humour by Richard Wood. Farce demands not only delivering a huge number of lines, but constantly getting timing and stage positioning just right as well - Lawrie and Richard did this superbly.

The flighty yet motherly Jane Tate (Linda Smith) helped to enhance the subterfuge of the plot - and there is only one local actor who can be entirely relied on to excel as a character who dresses up in a pink tutu and curly wig - it has to be Linda's other half Cameron ! 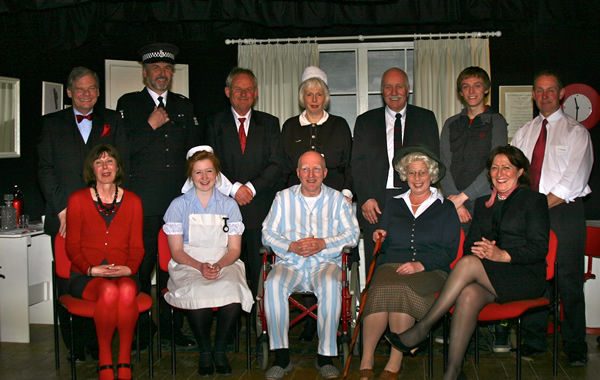 Liz Crawshaw found a whole range of facial expressions as the ever-incredulous Rosemary, culminating in having the last laugh, with husband Euan striking an imposing figure as one of London's finest, albeit with rather wet trousers !
Stephen Barker was always threatening to run amok as the mischievious wheelchair-bound Mr Lesley, complete with soda syphon, while Chris Gambles (Leslie) and Kerry Barker (Nurse) added youth and vigour to the show - giving us a clear indication that the next generation of the Husthwaite Drama Group is going to be even stronger than the current one.
Philip Hewitson as the pompous, and increasingly inebriated Sir Willoughby created a character somewhat reminiscent of James Robertson Justice, and his wife Margaret (Matron) ably managed the tough job of acting drugged for the entire second act, having fallen from the balcony in the first act and broken her arm ! And the appearance of Dr Bonney's mother at just the right moment to complicate the plot even further, also brought Catherine Skinner to the stage ably playing a character rather older than she is used to.
The Husthwaite stage was transformed into a doctors common room from a London hospital, complete with the second floor window needed for the inevitable "balcony struggle", and the backstage and front-of-house crews (including various members of the Coulthard, Nixon, Gambles and Pike families), contributed to the success, with top quality sound, lighting and film from Mike & Breda Wells, and John Ovenston. The striking black and red set was designed by Lawrie Hill, who assisted John Ovenston in the build.
And to think that the show represented a directing debut for Mary Hill, who is more used to being on the other side of the stage lights, ably supported by Brom Jennison, - the show was a triumph - playing to near-full houses, and maintaining the excellent tradition of having an usherette (Anne Dowson) serving interval ice-creams. It was worthy not just of Husthwaite, but of a bigger stage and a bigger audience - maybe we will be able to have both if the village is successful in securing the support for a new village hall.
Taking on a popular West End farce was a huge challenge, and, in this case the cast, director and backstage crew carried it off with aplomb. The essence of comedy is timing - not only was the timing on stage superb, but this is just the sort of laughter we cheer us up in these hard economic times ! More please !