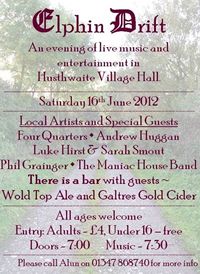 Elphin Drift time once again Folks, Saturday March 3rd in Husthwaite Village Hall. The confirmed acts are:
Rebekah Findlay - Possibly better known to regulars as one quarter of Yorkshire's own Folk Supergroup - FiddLyn Man Doris. Rebekah is a talented singer/songwriter, and already with one album - "Northern Skies" - to her name, Rebekah will also be playing songs from her latest CD - "Improvising around the Sun".

We have a number of first-timers to Elphin Drift, and Honeysuckle Rose is one such. Rose is a young singer/songwriter from Leeds - discovered purely by chance - and she is really enthusiastic about coming to play her songs for us.

Another first-time act to Elphin Drift is Over the Yardarm, who will be bringing us their own brand of "Fierce Folk", played on a number of instruments. Hailing from the Thirsk area their self-proclaimed brief is to provide "Acoustic instrumental music, that we want you to dance or at least fidget along to". With that in mind, you'd better all bring your fidgeting shoes!
Those of you who managed to catch some of the music (between deluges) at the Apple Fair in September, may remember The J2Alis, who did a lovely, harmony-rich set there. They will be back in Husthwaite on the third for what I have promised them to be a rain-free set - so I will be sheeting the hall roof just as a precaution.

Rebekah, Rose and Over the Yardarm can all be found on YouTube if you fancy a preview, but we all know there's nothing like the real thing.

Sound desk and lights will be skilfully operated as ever by Mike Wells of Byland Media, The Maniac House Band will open the musical ceremonies at half past seven, and play the night out until Mike pulls the plug. We have the usual Ale and Cider bar including Lager, Wine and soft drinks. Doors open at 7pm, and entry is £4 - free for under 16s. I hope to see plenty of you there.
Alun Nixon
01347 868740