Not the Evergreen Club 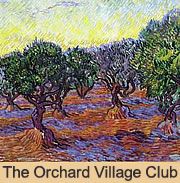 Though one or two hanker for the old name, most believe we should have a fresh start under a fresh name not alluding to the previous club. The Evergreen Club was primarily for quite Seniors, well organised and much appreciated though that was.

The 21st Century club is intended for a wider membership of any age, especially welcoming those who don't get out much , any who would enjoy an hour or two of company with local friends, neighbours or past acquaintances from elsewhere in Husthwaite or the immediate vicinity. It would also be an opportunity to get to know recent arrivals too. If you have a lonely friend in Carlton, Coxwold, Easingwold, Wass etc. please try and get them to come along.

We particularly welcome past members of the Evergreen Club, their past experience and ideas will be most useful.

The January inaugural meeting (New Year party and Phoenix Choir concert) opted enthusiastically for a new start and to be re-named The Orchard Village Club in recognition of the start-up grant of £200.00 generously donated by the Orchard Village Project (apple trees, juice etc). The Club's establishment and ongoing success will be a factor in the current application for Lottery Funding to replace the existing Village Hall, now fast approaching its 100th anniversary, in need of major improvement to what was even then not a new building.

On 7th February some 19 members - some from as far a-field as Northallerton - braved the snow and ice to enjoy super soup ( home-made, choice of two sorts) and either or both of slices of ‘licious lemon drizzle cake and fantastic fruit loaf, beautifully prepared and served by the catering staff. (More volunteers to spread the load would be appreciated).

The general wish for the next meeting (Tuesday 6th March at 12.30) is that a similar light lunch of soup and cake be followed by a Domino Tournament on tables of four players.
If you have a Domino set please bring it along together with your friends and neighbours - of ANY age or youth. We will welcome your ideas for the activities you would like to enjoy in future - realistic, please, a day trip to Disney World would be a little beyond us at present, though we can provide transport locally to and from the Hall for anyone with restricted mobility.

Looking forward to seeing you on 6th March, the ice and snow should have gone , but watch your step till then!