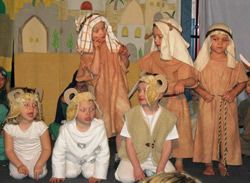 The festive season at Husthwaite School got off with a bang, or should I say wriggle, with our Christmas production of The Wriggly Nativity.

Tuesday 13th and the school hall, also known as the road to Bethlehem, was packed with an audience eagerly awaiting a musical extravaganza and the children from Nursery, Reception, Years 1 and 2 did not let them down.

6 narrators introduced animals, angels, shepherds, innkeepers, wise men and of course Mary Joseph and Donkey, brilliantly portraying the Christmas story in mime and song. The cast gave their best performances with a lovely solo from Mary.

It was enjoyed by parents and children alike and well deserved applause was given to Miss Goodchild and her party of elves, for coaxing star performances from such a young cast.