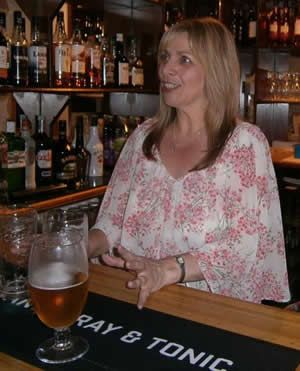 Parties around the country on 31st December 2011 for most people brought the prospect of fun with friends and family and of a New Year that would bring health, happiness, a Diamond Jubilee and the Olympic games.For a gathering of familiar faces in The Orchard Inn, the New Year was to bring all this and more.

A warm, welcoming atmosphere and friendly faces met the residents of Husthwaite and vacationers as they entered the village pub and Alison, our hard working land lady, provided a beautiful buffet.

Local musicians played alongside ‘A bit of a Gamble' to perform a selection of live music, which was enjoyed my many especially Jacqui Barlow and friends who commenced the dancing. They had a double celebration as the 1st January is also Jacqui's birthday.

As midnight approached, the partygoers gathered around the bar to celebrate the start of New Year. The count-down to 2012 began, Big Bens hands struck 12 and there were cheers, hugs and kisses all round as the congregation continued to watch thefantastic fireworks in London. Muriel Walker also celebrated her 81st birthday and a chorus of ‘Happy Birthday' could be heard just after the stroke of midnight.
That was when the party really got started, Alun Nixon continued the music with a disco and familiar

faces were seen gracing the dance floor with their presence. Lindsay and Jeremy Walker, Brenda and George Moss and Carol and Rick Fenwick were some of the village residents seen on the dance floor. They were joined by vacationists from Liverpool and Scotland, staying at Sleepy Hollow, who at the end of the night were persuaded to take part in the football match the following day... 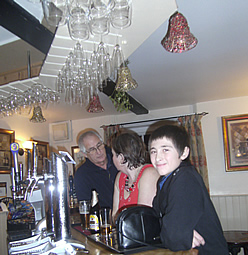 A good night was had by all and those who didn't attend missed out on a wonderful evening with pleasant company.
Alison will continue to host events in the future for the residents of Husthwaite, the next of which is the fortnightly Quiz on Wednesday 4th January 2012. Also on Tuesday 20th March 2012 there will be another chance to attend a psychic evening which was very popular last time welcoming people from far and near.

Thanks to Michelle Fenwick for the story and photographs.