Wind in the Willows 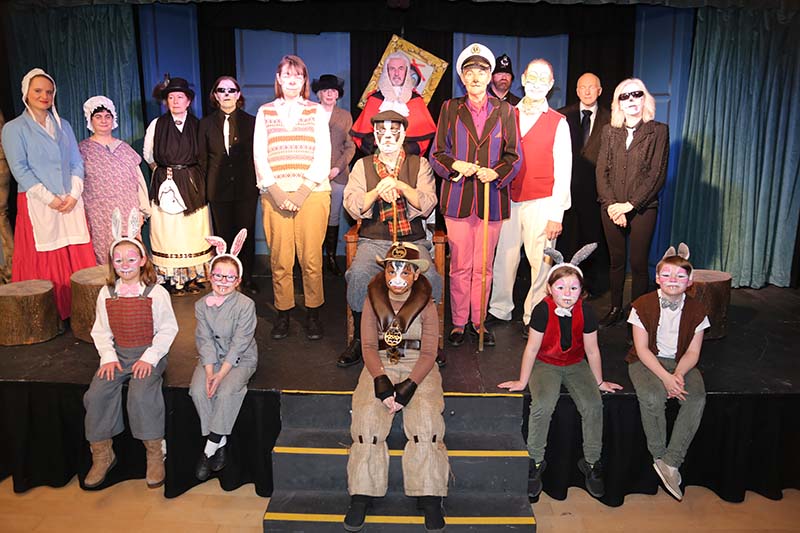 The photos of the play, taken by Jan Januriek and Brian Watt, can be seen in full here

A play at Husthwaite Village Hall...the first night A word first....I'm not going to single out anybody by name. I got the feeling that it really mattered that this was such a collaborative effort. Everybody had a vital role to play, each as important as any other. So no names; they're all in the excellent programme anyway.

It's a good story. Four key characters, Rat, Mole, Toad and Badger tell the tale of life and friendship in the countryside. Toad is wealthy, foolish and deludes himself. He gets a harsh come-uppance and learns a bit, maybe . There's evil in the woods too; the weasels are a constant threat to the whole stability of country life. Alan Bennett has some funny and biting things to say. Look at the judge happily favouring the people like himself. A young rabbit gets pointed out, "His dad ended up in a pie last week". A mole bemoans how many of his relatives get made into waistcoats. Without the horse, Toad's caravan goes nowhere, but the horse talks poignantly about being patronised and ignored. They are some of the funniest lines in the play but Alan Bennett is saying some sharp things about jobs and bosses.

This was a production of huge ambition and it did exactly what it set out to do. In order to tell this complicated tale, it needed a strong core of actors. The four were on stage most of the time and carried the production wonderfully. I saw the first night. Most things went brilliantly, but when the unexpected happened, the four pulled it back together seamlessly. Each one was, by turns, witty, a bit sad, and caring. The characters we get to know best make it feel like a play all about relationships. But they exist in a busy world of other animals and humans brilliantly brought to life by the supporting actors. I noticed how strong the children were and how good it was to see so many generations involved.

The scenery was a triumph from the moment the curtains opened. It worked so well with the music to create just the right atmosphere. Look closer and that's about literally weeks of original work, painting, composition, recording and performance. It's a paradox that the lighting and sound were so professionally done that you just didn't notice them.

29 A striking innovation was the easy use of back-projected sets. There's a theme; each of these essential ingredients is the polished result of hours of work and creativity, freely given.

The play calls for Rat to float into view in his boat. Later a horse drawn caravan trundles across. Later still Toad's new obsession, a motor car, drives around. The last surprise is a canal boat which chugs across as the Bargewoman sings her song. It's courageous to decide that these things will appear, an enormous effort of time and skill to construct them and real stage presence to act around them as if they are nothing out of the ordinary. And you need a team of skilled workers on the night, behind the scenes making it all work; invisible unsung heroes.

To make a play of this complexity needs not just the people whose work has been hinted at but also the willing people who put their imagination and commitment into publicity, box office, costumes, make-up, safety and hospitality on the night.

What to take from the experience? Part of it was to give four audiences a good play with plenty of laughter, a few gasps and a wry glimpse of human nature. That worked brilliantly; it's a job well done and a tradition carried forward.

But the other part, in my view, is about the huge amounts of effort, commitment and neighbours working hard together that went into it. You can't measure that or personalise it but beyond a shadow of doubt we are all, as a village, better off for it.

A real thank you to every person involved for that and to the guiding spirit that drove it along.