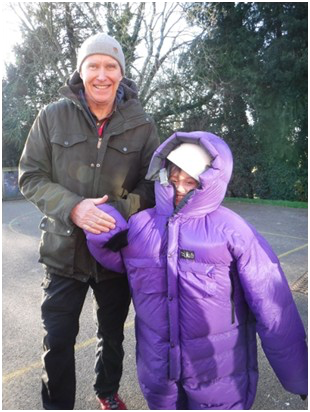 A highlight for all the pupils during the spring term has been an amazing visit by the celebrated British mountaineer, Alan Hinkes OBE. The whole school were shown pictures of his expeditions in an assembly before doing a special talk with Class 3 who have been learning about Mount Everest as part of their topic on Asia. Alan brought with him some of his mountaineering equipment that he had used to climb all 14 of the World's highest peaks (all over 8000m), including his enormous walking boots, huge down-filled suit and survival tent. Children were also given the chance to participate in a questions and answer session which really engaged the pupil's interest in Alan's achievements. Some of the notable questions and answers included:

What is your favourite mountain view Alan?
"Roseberry Topping - a wonderful 360-degree vista and one I never tire of."

What are you afraid of? "The sea."

What is your biggest achievement?
"Summiting Mount Kanchenjunga. It was my last peak and my toughest. I was totally exhausted and wasn't sure I was going to make it back down alive."

Which was your hardest mountain to climb? "
K2. It's the second highest peak, but my first top achievement. Only 300 people have achieved this climb and 90 of those have died."

What did you eat on these expeditions? "
I asked my Sherpa to make me chips and I would even eat them cold!"

The afternoon ended with Alan signing postcards for the children and donating a signed poster of him on one of the fourteen summits.

The whole school participated in a curriculum enrichment week focussed on STEM (Science, Technology, Engineering and Maths). Activities included the ‘Great Dunkin Debate' where children had to evaluate the ‘dunking' and ‘melting' properties of various biscuits (chocolate coated biscuits were not the best!). Class 1 made their own mini trebuchets and had fun seeing whose could catapult a ball the furthest. The nursery children were fascinated to learn about ice and how they could melt it. They experimented with cold, warm and salty warm water and discovered that warm salty water melted the ice the best! A brief was set for each class to design and build models of Tudor buildings linked to the Fire of London selecting suitable 25 materials from a range of equipment.

Year 2 children attended a Multiskills cluster event at Easingwold Outwood Academy. The children were in mixed teams with children from 4 other schools:. They took part in activities which included running, balancing, team games, speed bounce and

‘All the games were really fun, I most enjoyed the balancing game using tennis rackets and bean bags.' (Henry) ‘I liked all the games and my favourite was the jumping from side to side (speed bounce). I liked being with different children because you could make new friends.' (Gabby)

Children in Year 1, Reception and the Apple Tree Nursery have enjoyed their recent topic on ‘Dinosaurs'. They started with the question "What are, and what do we know about dinosaurs?" Year 1 and Reception children loved learning the names and types of different dinosaurs, comparing the size of the largest dinosaurs to the size of the school, discovering what food types they ate and enjoying sharing some of their scary dinosaur writing with the rest of school.

26 mud' to excavate fossils and pretend they were also dinosaurs. The topic ended with all children visiting the Yorkshire Museum where they were palaeontologists for the day taking part in a dinosaur dig workshop and making their own fossils. They learnt many interesting facts including that dinosaurs did not fly and they even got to touch dinosaur poo!

The Year 3/4 hockey team showed great team spirit and competitiveness in the cluster quick sticks hockey tournament. They were active on the pitch making it very challenging for their opponents. Their efforts were rewarded by finishing in 2 nd place. Well done!

Some other key events this term have included:

Years 5 and 6 were invited to watch Ampleforth College Theatre performance of ‘We Will Rock You'.

The School celebrated Children's Mental Health Week with the theme ‘Find Your Brave' and Safer Internet Day with the theme ‘Together for a better internet'. Key messages were reinforced with special assemblies to mark both events.

themselves reading a book or having a book read to them in an unusual place! A fabulous mixture of photographs which showed some very interesting, and inventive, locations to read a book! A display will put in the school library as part of our Reading Wall.

Children arrived at school dressed in their favourite ‘sporty' outfit on Friday 13th March to participate in a ‘Anythingathon' as part of Sport Relief 2020 organised by our School Council. The children were able to choose from running a mile, hula hooping, skipping and basketball dribbling. A great way to get .