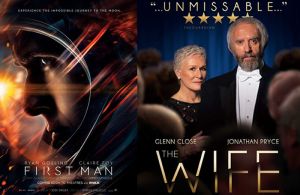 Friday 15th Feb "The Wife"
A wife questions her life choices as she travels to Stockholm with her husband, to receive the Nobel Prize for Literature. With superb performances from Glen Close and Jonathan Pryce.
Thurs 28th March "First Man"

A look at the life of the Neil Armstrong, and the legendary space mission that led him to become the first man to walk on the Moon on July 20, 1969.
Film Club starts at 7.30pm.

Film Club is now in its 7th year. Originally founded by one of our young local film enthusiasts, who has since gone on to University and life in Edinburgh. Nevertheless, Film Club continues in the same format as originally intended. We aim to show a mix of mainstream, independent and foreign language films to appeal to as broad an audience as possible. Last year, favourites included "Dunkirk", "Darkest Hour", the beautifully hand painted "Loving Vincent" and the quirky "Isle of Dogs".

For the last three years we have held a Short Film event in July, which has been very popular, and our Christmas Movie and Cocktail evening is always special. Last year we also introduced a "Members' Choice" evening, which we intend to continue each year.

In 2019, we kicked off with a little known Independent movie called "The Meyerwitz Stories", recommended by the Film Club founder! February and March will be dedicated to a couple of critically acclaimed mainstream movies; "The Wife" in February, starring Glen Close and Jonathan Pryce, and to celebrate the 100th anniversary of the moon landings we are showing "First Man" in March, starring Ryan Gosling, which traces the life of Neil Armstrong.

Film Club is on the 4th Thursday of each month (generally, unless dates clash with other events). Annual membership is only £12 (£10 for over 65's), part year membership is also available.
Thank you to everyone who supports the Husthwaite Film Club and hope to see you there! For more details, contact Sheila.
Sheila Mowatt