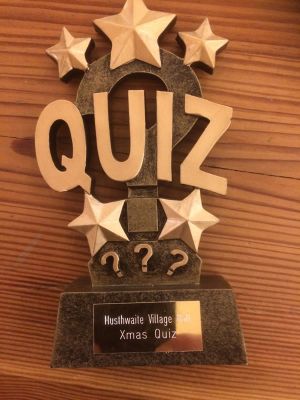 Another year and another fantastic turn out to our annual end of the year Big Fat Christmas Quiz.
With over 60 in attendance, making up 11 teams, we were treated to an eclectic choice of rounds by quiz masters Lawrie Hill and Will Mowatt.

Jokers were played strategically.....or so you would think!

However, since the title of the rounds gave nothing away, it was more of a leap in the dark, which only added to the good humour and competitive spirit. Half time mince pies fuelled the teams as the race for the coveted trophy continued.

Spot prizes were awarded for, just about anything really!

Last year's winners, although unable to hold on to their title, didn't go away empty handed, earning top marks for the opening spot round, well done Calum Mowatt & Friends.

It was eventually a close run finish, decided by the last round and only two points. The Plebs (Coulthards, Sheila Mowatt and Mary Hill) were modest in their victory, posing for pictures with the coveted trophy. Thank you to all that came and special thanks to Lawrie and Will for organising.