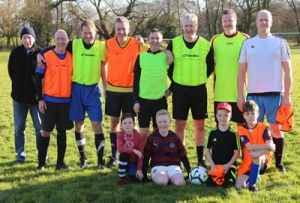 It felt like a Spring morning!......The eighth Husthwaite New Year's Day match kicked off just after 10.30am at Coxwold. Once again Coxwold Playing Fields kindly let us use their pitch. There was a slight delay kicking off as one of the goal posts was missing and remained unfound. New goals required for 2020...

The teams were picked based on matching age and ability with the final balance achieved by having one very large and one small goal. This proved to be extremely effective and perhaps an idea the Premier League should prioritise above VAR (Video Assistant Referee).

The youngsters of the village were represented by Oscar and Reo with Reo's cousins providing more youthful energy. Experience was represented by Jeremies Walker and Justice, Will Mowatt, Steve Broughton, Neil Milllan, Mark Kingston and Martin Gallon.
Perhaps the most important participant was the referee, Stephen Barker, who ensured that match finished level 8-8 and level on penalties. Some of his decisions might have been overturned if VAR were available.

The Plum and Partridge put on bacon butties after the match.
Thanks to everyone players and spectators for coming along.
Will Mowatt