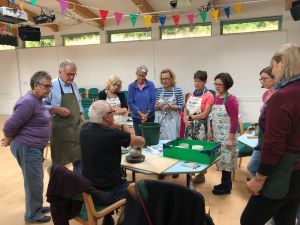 Raku generally refers to a type of low-firing process that was inspired by traditional Japanese raku firing.

Western-style raku usually involves removing pottery from the kiln while at bright red heat and placing it into containers with combustible materials. Once the materials ignite, the containers are closed. This produces an intense reduction atmosphere that affects the colours in glazes and clay bodies. The drastic thermal shock also produces cracking (known as crackling since it is deliberate). 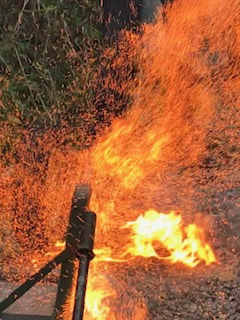 The original Japanese style of raku is an outgrowth from Buddhist influences in life and especially in the tea ceremony.

So, David Duckworth, (who spent some time last year studying Raku in Japan under the 15th generation Raku master Raku Kichizaemon) came to our village hall to introduce us to the process.

With some enthusiastic participants we listened, learned and finally produced three clay pieces. An indication some of Dave's words had been absorbed.

This was a tranquil session accompanied by Zen like music.

Our ‘creations' were taken away by Dave, biscuit fired and returned for the glazing and this session proved to be combustible and best observed from some distance.

For one of the ‘reduction' firings several pieces were buried in sawdust and retrieved.
Sheila's was not there and she scrutinised everyone's to make sure someone else had not misappropriated hers. Drawing a blank, it would be an understatement to say she was bereft. Urged not to sulk when consolation failed, when the piece was finally found ...well...things were better.

If you happen to visit one of the participants houses, be sure to remark kindly on the intentionally malformed work proudly displayed. 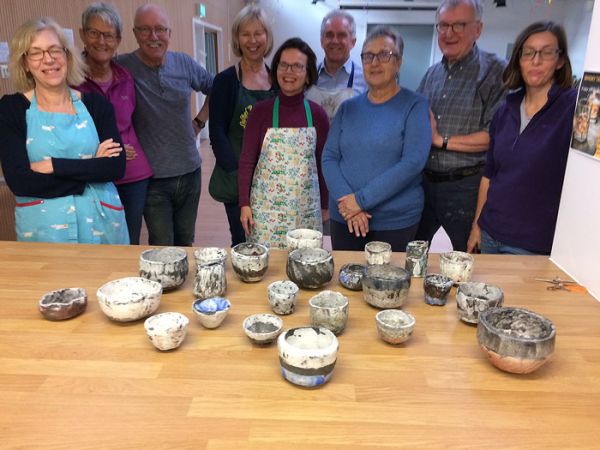 Dave Duckworth was brilliant, and as a measure of the success of this venture we all are keen to return to this medium.