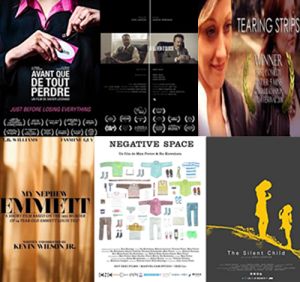 Each year, we hand pick, from hundreds of short films, a selection of the best Oscar nominated short films.

Short films are often the route for many aspiring writers, directors and actors trying to make their name in the film industry. Who remembers the Oscar winning "Stutterer" with the very local connection (Guy Armitage's sister was the Producer) or last year's "Drone" a work in progress from our own Calum Mowatt, the Film Club founder.

This year, we were treated to another eclectic mix of genre and cultures including the British 2018 Oscar winner "The Silent Child". And to round off, as we do at every Film Club special event, an Oscar worthy cocktail was on hand, the "French ‘75", made popular at our "Casablanca" evening and now a Husthwaite Village Hall special!

Husthwaite Film Club meets the 4th Thursday of the month (organisers availability permitting!) and aims to bring a mix of genres to our members and guests. Membership is £12 per year or pay as you watch for £3 per screening. On 30th August we have the Best Actor Oscar Winner, Daniel Day Lewis, in “Phantom Thread”, a beautiful story of a 1950’s couturier who takes a young waitress as his muse, and reportedly Day Lewis’s last ever film. On September 27th we will be screening “Funny Cow”, starring Maxine Peake at her finest as a comedienne trying to make a living doing stand up in Northern England’s working men’s clubs.