Light Music for a Summer's Evening 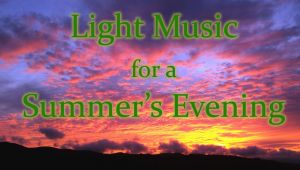 The perfect way to spend a summers evening, with the Chris Irvin Concert Orchestra.

The Chris Irvin Concert Orchestra, based in Leeds, specialises in the vast heritage of Light Classical Music. Many of its two dozen players have been making music together for a number of years. Their repertoire includes favourites such as The Poet and Peasant Overture and excerpts from Oklahoma, as well as novelty pieces such as Jumping Bean.
Christopher Irvin is a Yorkshire-based composer and conductor whose music has been featured on Classic FM's John Brunning "Drive" programme. The orchestra will be playing some of his compositions too.
Father and son violinists, Mark and James Ostyn, will play a movement of Bach's Double Violin Concerto. Mark is a distinguished violinist who was the Musical Director of the famous Scarborough Spa Orchestra and later Conductor in Residence for The Penang State Symphony Orchestra and Chorus in Malaysia. You may remember him playing at the opening concert of Husthwaite Village Hall in 2014.
Mark will be joined by his talented son, James. Just eight years old, he has already made an impression wherever he plays and is a popular violinist at weddings and functions.