Cinderella Makes It Through the Snow 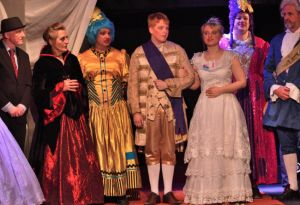 It's a long journey that takes Cinderella from bullied kitchen maid to fairytale princess. This time she very nearly didn't make it. After months of planning, rehearsals and detailed preparation by a huge number of villagers we were ready to set her on her way.
Then down came the snow.

A lot of snow. It was the first time since 1982 that Tony Fox had had to dig out the Flower o'May lane.
The show must go on. First night we managed without the 4-piece band. Music Director John Butcher got here from Stillington and did the accompaniment on his guitar. It wasn't a bad performance, even when Cinderella (Maja Szyszka) nearly resorted to some fruity language in her native Polish as the outrageously hilarious Ugly Sisters (Cameron Smith and John Law) went awol for three long minutes.
Second and third nights the snow was worse and this time Husthwaite's community spirit launched Panto Rescue Mission - Brian Watt and Jeremy Walker fetching the band and some cast members across the icy wastes 4 x 4 style.

Buttons (Kieren Hardy) held the show together with his energy and spirit. They loved long-time village favourites Stephen Barker and Anne Dowson as the inept Mr Snitch and Mrs Snatch. They hissed the fearsome stepmother, Lady Devilia, played by Liz Crawshaw, as she tormented Cinders and attacked her bumbling husband, Baron Hardup (Euan Crawshaw) with his own blunderbuss.

The comic flow of the play was interspersed with poignant moments of beautiful singing by Baron Hardup to his daughter and by the Prince (Jamie Millan) as he fell for Cinders.
Although we had to turn this time to old friends from Easingwold in order to cast this play, there is young talent emerging in the village. Playing Dandini, Fergus McClanachan won many friends with the delicacy of his touch and his deadpan timing. The youngest children, including Husthwaite's Isla McClanachan, Gaby Hollinrake and Roxy Macallum, survived a testing rehearsal schedule and emerged triumphantly as villagers, rappers and a range of animals.

Of course, we had a pantomime horse. She was enthusiastically clapped from her first entrance and went on to feature as the Major Domo, backing herself as the 1000 to 1 outsider in the race to marry Cinderella.

Come ugly Ugly Sisters, come horrifying Stepmother, come spiders in the woods, come snow and ice, we were safe in the promise of the benign and charming Fairy Godmother (Breda Wells) that we would have a happy ending.

And so we did. The pantomime came to a rousing climax in front of an almost full house on Saturday afternoon. The cast were at their peak. Jan Janiurek's photos will show you the beautiful set design work of Howard and Pauline Brown and the atmospheric lighting effects by John Ovenston.

A Byland Media DVD of the show is available, price £10. Contact Mike Wells 868398 hillcrestwells@btinternet.com
"It was brilliant all round - superb acting, set design, band, programme, sound and lighting" - Angela Ovenston

Photos from the snow by Jan Janiurek