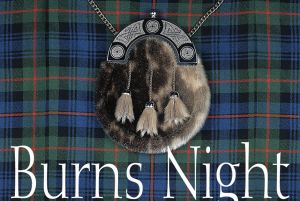 Saturday evening 27 January saw the twelfth Husthwaite Burns Supper at the village hall, which was suitably decked out for the occasion, with flags, elaborate lighting and exquisite table decorations.
The traditional programme for the evening had a number of clever modern variations. The haggis was piped in and Will Mowatt gave a resounding and animated recital of the Address to the Haggis, followed by Brian Watt who gave the Selkirk Grace and proposed the Loyal Toast. Malt whisky was available at the bar and this superbly complemented the haggis, mashed neeps and tatties (prepared by Elaine Watt and the Plum and Partridge) that were served as an opening course to an impressive buffet (co-ordinated by Sheila Mowatt) and seemed to help the non-Scots among us follow the more difficult passages in the Address to the Haggis.
After the meal, Brian Watt gave an ingenious and humorous address in proposing the toast to the Immortal Memory of Robert Burns by linking his works to various modern personalities, popular culture and current affairs, which included Meghan Markle, ‘Bake Off' and inevitably, Brexit.
The Toast to the Lassies was proposed by Stuart Thrower, while Jo Thrower proposed the Reply on behalf of the Lassies. Stuart gave an interesting and entertaining insight into the Thrower household, which seemed to be dominated by ‘stuff', notably cushions and candles; he seemed quite bewildered by all this. Jo, in her reply, described the declining expectations women have of men as they get older. This hilarious account including hair loss, memory lapses, dwindling imagination and growing inattention and would have been all the funnier if some of the anecdotes hadn't had an uncomfortable ring of truth.
The dancing after the speeches seemed to run quite smoothly and demonstrated - one might almost say - skill! Even the Eightsome Reel went relatively well and without serious injury.
As the evening ended at midnight, Brian Watt, who ‘called' the dances during the evening was heard to remark that he might include some more complex routines next time!
Thanks are due to Jan Janiurek, official photographer; Sarah and David Aspinall, who together with Nicola and Nick Cuthbert set up and cleared the hall. Particular thanks to Sheila and Will Mowatt and Elaine and Brian Watt for organising such an excellent evening.
Philip Hewitson