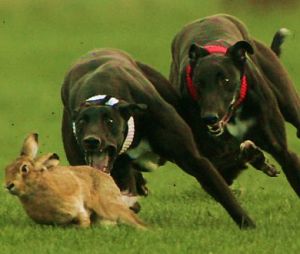 The issues of illegal hare coursing and rural theft have generally been getting worse over the
years and recently we had a meeting with North Yorkshire Police to see if the AONB Partnership could do anything to help. The Police indicated that they would like to extend the Rural Watch scheme that is already running in the Wolds, and which some of you may already be involved in. As a result of the meeting there are three things that we feel we can do to help:

1. Encourage increased vigilance and reporting now, when hare coursing is at its worst. Contrary to popular belief, if you see suspicious activity on your land at any time then you should ring 999, because a crime is potentially in the course of being committed. If they can attend then the Police will use any legislation at their disposal to disrupt poaching activity - Game Acts/Hunting Act, Criminal Damage to growing crops, lack of vehicle tax/insurance, vehicle defects, Dispersal Orders, etc, etc.

Some of these offences mean instant seizure of a vehicle, or on-the-spot fines. When reporting suspicious activity gather as much information as it is safe to do - vehicle colour and type should be the minimum, so the Police at least know what sort of vehicle they're looking for. If you find evidence of overnight poaching then report it on the non-emergency phone number 101, giving any info that you can.

In some cases you may be able to tell if it was a 4x4 or something lower like a Subaru, or if for example it had Mud Terrain tyres on. All these reports can help form a much bigger picture, and your report might be the last piece of the jigsaw that leads to someone being stopped and caught.

2. Help set up a Rural Watch scheme in the Howardian Hills. We're planning to arrange a meeting in April to see if local farmers and gamekeepers would like to set up and run a new group to cover the Howardian Hills. We can convene the meeting and potentially provide the Police with some funding to buy kit to use during organised evening patrols, but otherwise it will be for the Police and yourselves to decide if and how it might operate. We'll be writing again in due course to let you know the date and venue for the meeting.

3. Improve the security of your land. Many farmers and landowners have started fencingoff their fields to stop vehicles driving straight in from roads and tracks. In the past we've given grant aid to schemes which fence and also plant or gap-up roadside or track-side hedges. This improves both the landscape and farm security. In general we've worked on the basis that if you pay for the fencing then we'll pay for the hedging alongside it.

Natural England has just announced an improvement to its Hedgerows and Boundaries Grant Scheme, which gives grant aid for gapping-up existing hedges. The budget has increased (so more applicants should be successful) and the maximum grant is now £10,000. It pays a flat-rate of £9.50 per metre of hedge planted. Although the grant is purely for hedge planting and not for associated fencing, here in North Yorkshire £9.50/m is almost double a contractor's rate so would go a long way towards the cost of the new fence as well.

The closing date for applications to Natural England is 30th April 2018, for schemes to be planted next winter.
If you wanted to plant a completely new hedge then the Natural England grant wouldn't be available. The AONB Team might be able to provide grant aid, provided that it meets our objectives on landscape or wildlife benefit as well. If you'd like to let us know

if this Rural Watch scheme is something that you might want to get involved with, or you would like to discuss a fencing/hedging project, then please get in touch with the AONB Team. Otherwise, please look out for another letter in March notifying you of the date and venue for the meeting.
P B JACKSON
AONB MANAGER