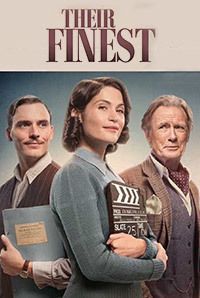 Husthwaite Film Club starts a new year on Tuesday 23rd January at 7.30pm
with the British comedy
"Their Finest" Cert 12A

"A former secretary, newly appointed as a scriptwriter for propaganda films, joins the cast and crew of a major production while the Blitz rages around them". Starring Bill Nighy and Gemma Arterton.

Husthwaite Film Club aims to show a selection of mainstream, independent, foreign language films and documentaries. Our June Short Film Festival has been especially popular as is our Movie and Cocktail special events!

Profits go back into Film Club to secure better quality films, equipment and other subsidised evenings.

Film Club meets the 4th Thursday of every month although please note, in January & February we are having to work around the Village Pantomime rehearsals.
Bar opens at 7pm for a 7.30pm screening.

Love to see you their, everyone made most welcome!
Sheila, Will & Calum Mowatt