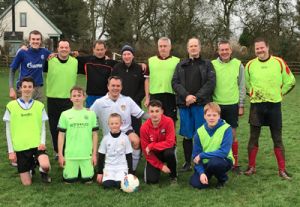 We had a fantastic turn out for this year's New Year's Day match. Twenty brave souls turned up at 10.30am, some making a first appearance and some their seventh appearance.

Coxwold kindly allowed us to play on their pitch, the school pitch having earlier been deemed unplayable. It is fair to say that the pitch "took a stud". Jeremy Walker (Yellows) and Will Mowatt (Oranges) picked sides with Jeremy using his inside knowledge to pick the only goalkeeper and most of the attackers. This proved to be a master stroke. The Yellows were a potent attacking influence with Daniel Granger, Calum Mowatt, Bobby Pearson, David Millan, Jack Somers and Oscar Kingston keeping the Oranges deep in their own half (OK some of them might have been in midfield but it didn't feel like it!). They quickly went 2-0 up with the Oranges showing the advantage of having a goal keeper who commands his area. Defensively the Oranges tried manfully to stem the attacking threat of the Yellows with Rob Colton providing some last ditch tackles and Rory Sheard showing the calm considered footballing nous of a true Celtic fan.

At half-time, the Oranges were 3-1 up, after a consolation goal by Neil Millan (who after one run into the attacking half decided to stay there for the rest of the game), in response to goals from Bobby Pearson (2) and Calum Mowatt. At half-time, rather than change ends, the referee agreed that it would be "fair" for the Yellows to adopt the full size goal to give the Oranges a better chance of scoring. Sadly this was not enough.

At the back, the Yellows kept a tight rear guard with Mark Kingston proving very difficult to beat and the defensive line of Jeremy Justice, Jeremy Walker and Craig Colton giving the Yellows few opportunities. The Justice brothers, Sam and Olly plugged away on the left hand side for the Oranges, showing that despite being Sheffield Wednesday fans, they knew how to play passing football. On the right, for the Oranges, a combination of Steve Broughton and Marcus Sheard gave some balance. However, it was a big pitch...

Despite the opportunity to score in the full size goal, the Yellows increased their advantage with goals from Daniel Granger and Oscar Kingston. A reply from Kit Chappell ably assisted by brother Sam wasn't enough and the Yellows finished the match as 5-2 winners. Thanks again to referee, Stephen Barker, who demonstrated that refs don't need to move that far to control the game!
The Plum and Partridge put on bacon butties after the match.