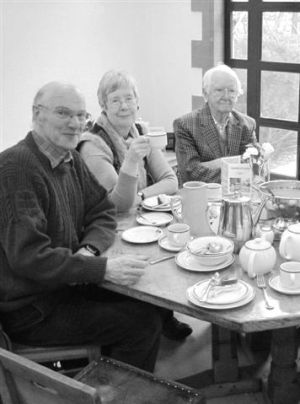 After a long and active life, Fred died recently, peacefully in his sleep at the age of 92.

Before he retired, he was deputy head in a Leeds secondary school. He showed a great interest in local history and in his late seventies and early eighties was an active member of the group. He was instrumental in obtaining permission from the Church to place a plaque on the churchyard wall, overlooking the village green, to commemorate the life of William Peckitt (1731-1795), the stained glass maker who was born in Husthwaite and revived the art of stained glass painting in this country.

This project involved a lot of letter writing, paper work and patience with various authorities. Fred's article about the Peckitt family can be read on our website or found in leaflet form in the church.
In 2004-5, possibly spurred on by an interest in previous occupants of The Hobbits, one of the oldest houses in the village occupied by his son Oliver and family, his research led to various articles on the Moncaster family who once lived there - "The Turbulent Days of Husthwaite's Robert Moncaster 1762-1823", "Robert Moncaster (1796-1854)", "Last Will and Testament of Robert Moncaster (1796-1854) Schoolmaster" and "The Times of Schoolmaster Robert Moncaster 1796-1854". He also wrote a wide range of other articles - "William the Conqueror Checked Out the Wapentake of Birdforth", "The Village Green Tree needs a Second Glance", " A Husthwaite Traitor", "Familiar Village Names, 19th Century Husthwaite, 1823", "Victorian Postal Services in Husthwaite" and "Coronation of Queen Elizabeth II - I was there!".

All these articles can be read on www.husthwaitehistory.co.uk.
To keep everyone on their toes Fred also used to produce quite challenging local history quizzes at Christmas time! He would have enjoyed seeing local school children doing another quiz after viewing the recent exhibition. At this event Fred's poster about "Who Lived in Your House?" was also displayed. It listed the people who had lived at the Hobbits (once two cottages, Rose Cottage and Laburnum Cottage) between the early 1700s and present day and gave their occupations. [It might be interesting to do similar research on other old properties in the village.]

Fred was an enthusiastic member of the Local History Group. If anyone would like to join our small group and has good computer skills, (even if only for a short time to become involved in a project which interests them), please get in touch with Angela Ovenston (347) or Stephen Barker (259).

Suggestions for talks and speakers on local history or possible outings are also welcomed.
Fred (right) with Angela and John Ovenston on a History Society trip to Ampleforth Abbey 2013