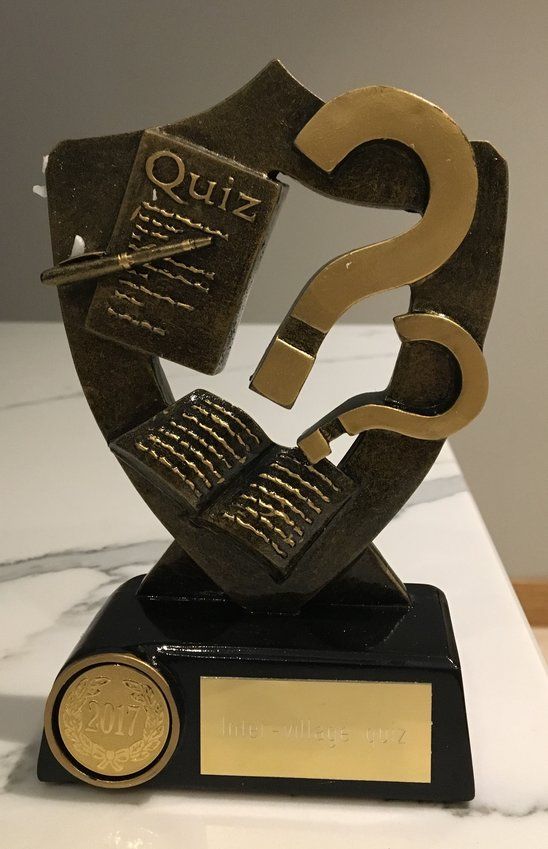 Saturday 17th November, what started out as a "lets invite a few surrounding villages" to join us for a village quiz, escalated to 14 teams and 11 different villages taking part in this epic quiz off!
The idea, originally put forward by Lawrie Hill at a Village Hall events meeting, very nearly didn't make it. However, a few calls to a few influential contacts outside Husthwaite soon stimulated a frenzy of interest which took us all a bit by surprise. Oulston even decided to put off their own Village Quiz to take part with not just one but two teams. Over a series of texts to a friend, the even smaller, Yearsley, were able to muster up the requisite numbers (Maximum of 6) to take part with the promise of "there's even a Trophy!" Over a matter of weeks, we had 14 teams confirmed.
Husthwaite put forward two teams, selected on the basis that we should let our regular teams who have always attended the Quiz's held in the hall over the years, and who have in the past represented Husthwaite at the Cold Kirby quiz nights. Teams known as the "Plebs" and "North & South." You will be glad to hear Husthwaite didn't come away empty handed, but perhaps not quite the finishing position we had hoped for, but more on this later........
Lawrie took on the role of quiz writer and quiz master on the night and did a fantastic job. Eight rounds ranging from "Icons" to "Oscar Winners", each carefully thought out, thoroughly researched and visually stimulating. Lawrie was assisted (technically) by Will Mowatt who kept him right on the question numbering (you needed to be there!) and maintained the score table.
Even in the first round the pressure was mounting, the Trophy was proudly on display at the front of the hall (in my defence, it looked bigger in the picture......), and the competitive tension could be felt around the room. So much so, that when I innocently went to collect money for the Fish & Chips from one team, I was promptly told to "sssshhhhh!" Probably best leave that job to a break I think.
The half time break was supplemented with the aforementioned Fish & Chips, supplied by The White Horse Café in Thirsk, which were piping hot and delicious.
The bar ran throughout the quiz, with the "Yorkshire legend" keg going down very well.
Scores were close and the final round resulted in a tie for first place, it was between Flawith and Yearsley. Two tie breakers later (you had to be there), Yearsley were triumphant, and announced Winner of the Inter-Village Quiz 2017!
Overall, the atmosphere was brilliant, a great wider community initiative seldom seen, and one for which there was resounding support for it to become an annual event. It was also another great way to get Husthwaite Village and its hall on the map as a great place to be.
In no particular order, all the villages who took part were; Coxwold, Oulston (2 teams), Kilburn (2 teams), Cold Kirby, Dalton, Flawith, Stillington, Yearsley, Ampleforth, Helperby and Husthwaite (2 teams).
Did I mention, Husthwaite didn't come away empty handed? "Husthwaite A" team are all proud owners of the Inter-Village losers Wooden Spoon!