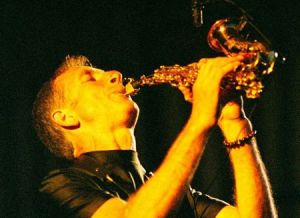 Watching Snake Davis and his superb band, I was reminded of just how many songs become classics because of a saxophone solo or hook, including Paul Simon's Still Crazy After all these Years, George Michael's Careless Whisper, Billy Joel's Just the Way You Are, Bruce Springsteen's Born to Run, Hazel O'Connor's Will You, and of course Gerry Rafferty's sublime Baker Street.

All these songs featured in The Snake Davis Band's recent performance at Husthwaite Village Hall. What's more, Davis reminded us that the people who write and perform these solos are invariably jobbing session musicians who are paid a set fee for a few hours in the studio and rarely share in the long-term earnings (often huge) generated by the recording.

Raphael Ravenscroft, the saxophonist responsible for the searing Baker Street solo was reportedly paid £27 for the session (by a cheque which, according to Ravenscroft, bounced) while Rafferty earned £80,000 a year in royalties for the rest of his life. Snake Davis himself knows what this feels like: he received a session fee of just £18 for writing and playing the iconic sax solo on Take That's 1992 hit A Million Love Songs.

But I don't think Snake Davis or his band are in the music business for the money: sometimes lost in their own playing, occasionally catching each other's eyes during a song, it is obvious when they perform that they love what they do. There is an obvious chemistry between Davis and his band: Gareth Moulton (guitar and vocals), Paul Birchall (keyboard), Bryan Hargreaves (drums) and Simon Goulding (bass).

The gig was part of the band's Classic Sax Solos tour, now into its third year, and was Davis's third appearance at Husthwaite Village Hall. Between songs, he introduced us to each of his range of saxes - the tiny soprano, alto, tenor and huge baritone - and paid tribute to fellow sax players, some well-known (Charlie Parker, Junior Walker, Lisa Simpson), others less so (like Ray Pizzi who played on the theme of eighties TV cop show Cagney and Lacey).

The show culminated with an outstanding rendition of Mark Knopfler's rousing theme from the film Local Hero, followed by a couple of encores demanded by a very happy audience. Their Classic Sax Solos CD is available from the usual outlets, and they have just finished recording a follow-up.