Race Night in the Village Hall 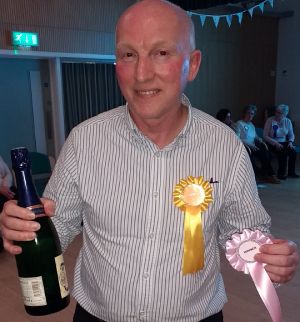 A new event opened the autumn horse racing season at the village hall in late September
The horses and jockeys were fashioned by artisan Andrew Coulthard, and painted artistically by the Coulthards and Lawrie and Mary Hill on a fun afternoon's craft session in the Hill's kitchen (see picture). With the addition of bases, strong cord and winding sticks, the horses were ready for action.
When the punters arrived on race night, they realised they would be the jockeys .

Sitting in a row, the jockeys waited for the off from Andrew Black, then frantically wound up the cords along the whole length of the hall. This proved to be more physical effort than actually riding a real horse up the hall, and yet none of the jockeys fell or withdrew. At the end of each of the 5 races, the winner was presented with a rosette, and then booked to appear in the grand final, when all the winners competed.

The races were sponsored by Andrew Burton (Mannion & Co). Barney Smith (The Hiseaway), Will Mowatt( Mowatt Financial Planning), Tony Fox (E.Fox & Sons) , Gavin Kennedy( Ferguson Johnson Limited) and Mel Casling (The Curtain Room).
Punters placed bets on each race, and since the jockey's form was a mystery, it was hard to decide who to choose. After a couple of races, we began to see form appearing, butt his proved to be no guide to later performance. Losers in one race won another. It was hard to tell if being a newcomer to 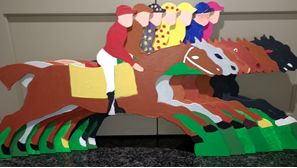 the race had an advantage over experienced jockeys whose arms were dropping off. Punters occasionally asked for a steward's enquiry, but in fact there was no evidence of anything but skill and strong wrists.

Will Mowatt somehow calculated the odds with the aid of his trusty computer, and these were displayed on the large screen for the betting public to try to make sense of. Philip Hewitson took bets and handed out the winnings. Making money (£3) on our bets till the 4th race we then lost it all and more, which goes to show you should stop while you are winning! Anyhow, half of all the betting proceeds went to the village hall.

Thanks to Margaret Hewitson for planning the event, to Sheila and Will for their bar work and organisation, Andrew Black for being Clerk of the course, and to all the punters for participating and cheering on the winners. Also the village hall committee are grateful to the race sponsors.

The top prize went to Stephen Barker, whose beat all competition in the grand final, due to his special technique of stick winding which somehow involved his knees. He was presented with yet another rosette and a bottle of very nice Bubbly.
Now the village hall has a set of horses, we can have more races in the future and hope for a very large attendance in the next racing season.
Jan Coulthard