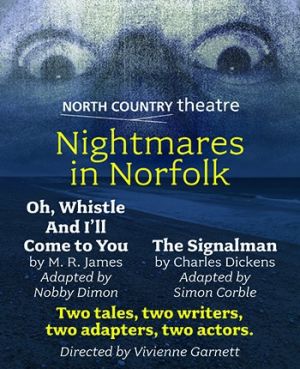 This year, there are two short plays, both Victorian and both ghost stories.
I remember being frightened out of my wits by the first of these two; a grainy black and white BBC play. It was a version of "Oh Whistle And I'll Come To You", M R James's Victorian ghost story. Michael Hordern is a professor, worn out by work and recovering on the Norfolk coast. He walks the empty beach in the evening and comes across a whistle amongst the pebbles. He can just make out some wording under the grime, blows the whistle...and nothing happens. At least not then. Later dreadful things come to pass.

As well as the M R James classic, there's also Charles Dickens's "The Signalman". The setting is an isolated signal box, in a deep cutting next to a tunnel entrance. The only contact with the outside world comes through the signal bells. But they are behaving oddly and seem to be warning the signalman.