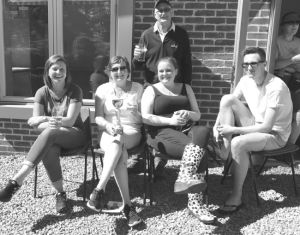 Summer just wouldn't be the same without the annual Husthwaite Treasure Hunt, and we weren't disappointed by either the weather, Barker's BBQ or this year's special Dinosaur - themed hunt (for the children!).

The adults were treated to the usual cleverly marked out route with recognisable (mostly) Husthwaite landmarks to follow. How hard could it be.....I'll come back to that!

Well done to the Simpson family for being first back on the children's hunt in a record time!

Overall winners and trophy went to the Fenwicks (pictured), a valiant effort with every clue solved! The Fenwicks have always been great supporters of this annual event so good to see them duly rewarded.

The booby prize would have gone to the Walkers but only if they had found their way back!

Thanks to Matt & Tori Fletcher for a superb Dinosaur themed hunt, to Nick Barker for his BBQ culinary skills and special thanks to Richard Wood and Stephen Barker for making another Husthwaite Hunt a thoroughly enjoyable event.
Sheila Mowatt