The Great Get Together

Sunday 18th June dawned bright, sunny and unusually hot for Husthwaite's Great Get Together in memory of MP Jo Cox, along with many other communities throughout the country.

It was Jan Coultard's idea for the village to take part in the celebration, Lawrie Hill who suggested a whole village photograph, followed by a Bake Off in the village hall and Sheila Mowatt who led the team- a big 'thank you'  for a superb afternoon.

A good number of villagers braved the heat and stood squinting up into the hot afternoon sun, while Jan Janurek took several photographs of young and old together. Some villagers may have moved on since the Millennium photograph but it was lovely to see families new to the village since then, turn up to join in and create a moment in village life that will go down through history. Then it was up to the village hall for the eagerly anticipated Bake Off!

On entering the hall we were all impressed by the quantity and lavishness of the cakes and bread spread out on cheerful gingham table cloths. Husthwaite's very own 'bread lady', Ashley Welsh and partner Jack Amos faced the daunting task of judging the produce before them. After many, 'oh that's delicious' and, 'that's really well cooked'  Euan Crawshaw was declared winner of the best cake with Maddie Kennedy a close runner up, while winner of the bread was Michael Simpson, Susan Broughton runner up with a special commendation to June Gitten. 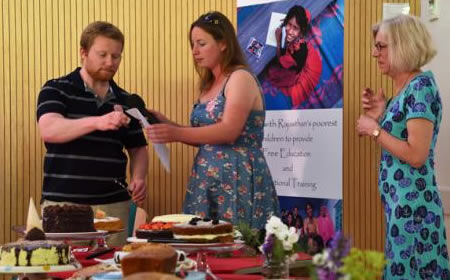 Judging was followed by tea, cake and bread all round and I must admit that choosing winners must have been extremely hard for Ashley and Jack as all the cakes and bread tasted by our table were absolutely delicious.

The afternoon was generally agreed to be a great success by everyone there and I would like to thank all who were involved in organising it, especially, Sheila and Will Mowatt, Lynn Colton and her team of helpers, Ashley and Jack, Annabel Kennedy, all those who very kindly made the cakes and bread and were brave  enough to put themselves up for scrutiny and last but not least the whole community for supporting such a marvellous event.

Gallery photographs by Jan Janiurek can be seen here.