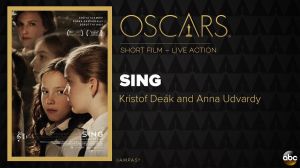 Following on the back of last years hugely successful Short Film Festival, Husthwaite Village Hall hosts another selection of Oscar nominated and winning short films, including the charming 2017 winner "Sing" from Hungary.

This is a unique opportunity to see a selection of short films unlikely to be released to the general public.

We are also excited to hear from Calum Mowatt, founder of Husthwaite Film Club and Edinburgh based "Neon Eye", about his newest projects and latest short film release "Drone".