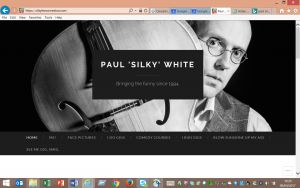 I'm not sure why I felt slightly nervous as I entered Husthwaite village Hall last week to see (at the age of 54) my first ever live comedy show, but I think it was my typical English fear of awkwardness. There was something slightly incongruous about four ‘fringe' comedians, more used to comedy clubs and festivals, appearing in a North Yorkshire village hall. What if they misjudged their audience and were met with stony silence or, even worse, thinly-veiled hostility? What if people were embarrassed by the inevitable attempts to involve them in dialogue? And worst of all, what if I was one of those people?

I needn't have worried. The comics - Paul ‘Silky' White, Aidan Goatley, Lewis Dunn and Philip Smith - quickly warmed to their audience, and we to them. They were amused by us, and didn't try to hide it; in fact, their largely middle aged, middle class, rural audience provided a rich vein of material. How often when they have asked an audience member, ‘And what do you do for a living?' will they have received the answer ‘I'm a shepherdess', as Paul did from Sandy? And Richard Spillman provided too tempting a target when he was spotted asleep at the start of the show (and several times thereafter). There was some leg-pulling about us having servants, and a lovely moment when Aidan, talking about an upmarket wedding he had attended, began to ask, "You know what it feels like when you turn up in a hired tuxedo and realise that everyone else there owns one ...?" only to trail off, looking round his audience with the implication that most of us wouldn't know.

Meanwhile, the comedians took us into their worlds: Paul told us about his girlfriend's witty comments ("They've missed out the ‘e'" - on seeing a hearse go past containing a floral tribute spelling the word ‘Dad'); Aidan described his experience in retail management, latterly in a Poundland in Brighton where he was recently assaulted by a woman who refused to believe that they didn't stock Monster Munch; Lewis explained how he had nearly got a place on The Apprentice by adopting the fictional persona of ‘Stanley Brooks', despite listing ‘washing my dad's car' several times in the ‘Achievements' section of his CV; and, in similar vein, Philip told us how he came to be the subject of an article in ‘That's life' magazine about a party he'd pretended to have thrown to celebrate his vasectomy (cutting edge comedy, you might say).

Without doubt, the star of the show was ‘Silky' White. With a commanding stage presence, warmth, and wit, he quickly created a rapport with the audience. Not only a talented comedian, Paul is also a gifted guitarist, combining both skills in a brilliantly improvised song which referred to every audience member he had drawn into the show during the evening. However, the funniest moment for me came when he turned his ingeniously folding guitar stand into an item of headgear and demonstrated how he used it to scare passers-by into dropping their takeaways and get himself a free dinner.

With a well-stocked bar (including good Yorkshire ale on draught), good lighting and the layout of the room, Will and Sheila Mowatt managed to create a club-like atmosphere. Perhaps with a few more comedy nights, Husthwaite Village Hall could become an unlikely addition to the comedy circuit.