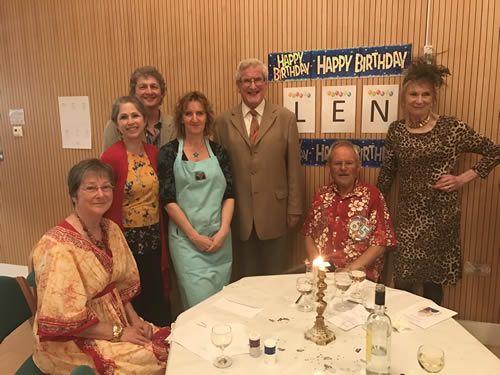 Len (played wonderfully by Richard Wood) was celebrating his 65th birthday, we were all invited to celebrate with him at the village hall. Len was born in Husthwaite but left many years ago and became a partner in a very successful business. The business had recently been sold, he had also just won the lottery. He had returned to Husthwaite as he had inherited the family farm. Safe to say Len was rolling in money. Quite a character was Len.

The village hall looked splendid as we all gathered for pre-dinner drinks, subdued lighting, gentle background music, tables all beautifully laid. It soon became clear as we chatted to Len's wife and friends that Len wasn't popular with everyone. His business partner, was very upset about the sale of the business and believed that he should have received more of the proceeds, so incensed was he that he was threatening to go to the papers about some shady business dealings prior to the sale.
Len's wife couldn't contain her excitement at the prospect of spending all of Len's money and was convinced that had she not been held back by Len when she was younger she would have been world famous as a Bluebell Girl! It seemed she would not let anything stop her from her spending spree.
As we enjoyed a superb dinner of Suicide Soup, Something Most Fowl and Apple Crimeble the atmosphere was convivial. It was set to be a wonderful evening.

But then from the top table where Len and his nearest and dearest were seated raised voices were heard, it was clear that all was not well. Some flounced out, clearly not happy. As the evening progressed their voices got louder and they became more agitated.

Suddenly one of the waitresses, who incidentally had been involved with Len in their younger days, let out a piercing scream and shouted - he's been stabbed, he's lying in a pool of blood! But who was it, who had done it and why? The victim was Gary, Len's business partner.
We were of course all very shocked, the unrest was still obvious on Len's table, Len suddenly began to feel ill after drinking a recently poured glass of red wine and went out for some fresh air - he never returned. His body was found by the same waitress who had discovered the first body and she had also served Len with his wine.

So two dead bodies - we were all in shock!

Well who did do it? Many theories were discussed, but it was revealed that the first murderer was Bess, Len's long suffering wife. Why had she done it, she thought that if Len's shady business dealings were revealed she might lose some of his fortune and she couldn't have that.

Did she also murder Len and if so why? Or was it the waitress who had a connection with Len that he was in denial about?
Well the truth took us all by surprise, Len died of natural causes, so two deaths but only one murder.
It was a great evening, something different and enjoyable. David Pike devised the Murder Mystery and also took part in the performance, all the cast members were brilliant, I'm sure we'll see them in the West End one day.

Thanks to all who were involved in the planning and organising of the event, and compliments to the chefs for the delicious "Dinner to Die For".