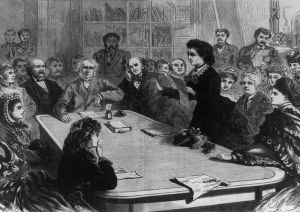 2. Minutes of the Previous Meetings: Approved and signed as a true record. 3. Matters Arising:

3.1 Parish Plan Actions Review: A visit by members of the PC to Husthwaite Primary School is still to be organised. Estimates for floodlights at the MUGA (as suggested by the Youth club) and connection to mains electricity are well beyond the present means of the PC. Therefore it was agreed not to pursue this idea, and CC will inform the Youth Club accordingly. Action: CC

3.3 Commons Act 2006 Registered Land - Kendrew Green: PF reported that NYCC want a mutually satisfactory solution to the ownership and maintenance of Kendrew Green, though seem unwilling to allow it to be registered as a common. NYCC have suggested licensing the Green to the PC, but clarification of maintenance and insurance liability is still needed. PF will continue negotiations with NYCC when the draft license is received. Action: PF

3.4 Fracking in North Yorkshire: PF reported that the PC will shortly receive a registered number to appear at the Statutory Meeting on Fracking before the government inspector later in 2017, to make representations about NYCC's plans for fracking. PF agreed to represent the PC. Action: PF

3.6 Emergency Planning: CC is to meet Mark Gambles to continue work on the plan. Action: CC

3.7 Local Plan - Call for Sites: The Local Plan Preferred Options Consultation meeting confirmed
that neither site offered for future housing development in Husthwaite was considered suitable by HDC. Therefore, although we will probably be allocated some housing in windfall sites, at present Husthwaite has no housing allocation in the new Local Plan.

3.9 Parish Council Noticeboard: There was a report from Andrew Coulthard that the noticeboard restoration is almost completed.

4.1 Removal of Public Payphones: BT have informed the PC of their intention to remove the public payphone on The Nookin which has been identified as unnecessary and no longer viable.The PC agreed that there was no point in adopting the present phonebox.

4.2 Settlement Character Assessments: The consultation was completed by the PC with a
suggestion to include the view from Beacon Banks to the north and the Recreation Area as a designated local green space. In addition the PC requested that the present Development Limits were retained to safeguard the character and form of the village.

4.3 Battle's Over - A Nation's Tribute: On 7th November 2018 a chain of nationwide beacons is planned, to commemorate the ending of WW1. The PC are investigating the possibility of getting landowner's permission to have one on Beacon Banks, and ageed to obtain an estimate for the cost of a metal fire basket. Action: AG, PF, CF

5.1 The following planning applications have been received:
The Garage, Low Street, Husthwaite - Outline application (considering appearance, access, layout and scale) for the demolition of existing buildings and construction of 3no dwellings. (The Parish Council wished to see the application REFUSED as two of the proposed dwellings are well behind the development limit).
Bye Green Holdings, Low Street, Husthwaite - Retrospective application for change of use of agricultural building to general machine / contractor repair. (The Parish Council wished to see the application REFUSED until a number of HDC policies were taken into consideration)
Coach House, Kays Bank, Husthwaite - Replacement of existing conservatory with garden room, alterations and removal of bay window to the west elevation and construction of a new entrance hall and minor alterations to fenestration. (The Parish Council had NO OBSERVATIONS on the proposal). 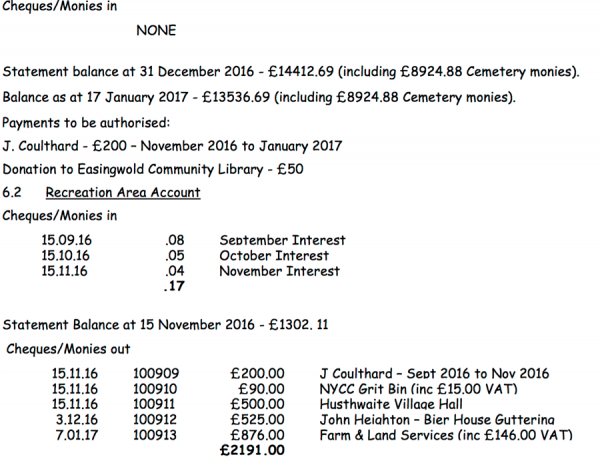 7. Circulated Items That May Be Of Interest To The Council: None. 8. Reports from Council's Representatives:
Village Hall: The new Joint Chairs for the Village Hall Committee are Lynn Colton and Sheila Mowatt.
Easingwold & Villages Forum: No report. The next meeting will be held in the Galtres Centre on 23rd February.

YLCA: No report.
Public Footpaths: No reports of problems.
Highways: CF has reported the state of Highthorne Lane to NYCC Highways because of the numerous potholes.

MUGA: On the recent inspection of the Recreation Area it was noted that the MUGA surface was extremely slippy and had moss growing on it. Therefore it was agreed to obtain a quote for cleaning the surface and treatment with moss killer. Action: CF

10.Date and Time of Next Meeting:
The next meeting will be held on Tuesday 21st March 2017 at 7.30p.m. in Husthwaite Village Hall.