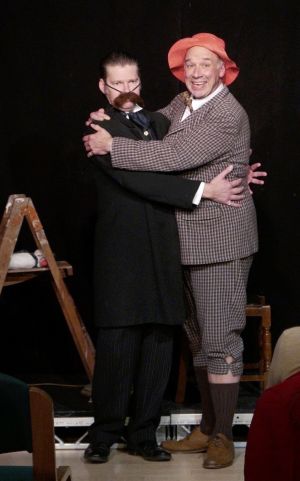 At the beginning of this play at Husthwaite Village Hall on bonfire night there was a brief two minute period, while Sherlock Holmes gave his opening monologue, when the audience started to settle back in their seats to watch a worthy Victorian melodrama unfold. However, the mood suddenly changed dramatically when a very panicky Watson burst through the backdrop curtain to announce that all the stage sets and the rest of the cast were still in Hull rather than in Husthwaite.
The hilarious consequences of a lack of actors and scenery played out for the rest of the performance. It was now down to Holmes and Watson to take on the roles of the Prime Minister, a floozy and a lighthouse keeper as well as themselves, which became something of a feat when all the characters were on the stage together. Fortunately, there was a child's teddy bear on hand to help with some of the more complex character combinations.
Inevitably, the humorous bickering between the two about who should play what part ended up with Watson playing most of the other roles as well as handling the ‘scene changes'. Thus, variously with a large fake moustache, a feather boa and a pink hat that gradually disintegrated as the action became more frenetic, Watson charted his way through these transformations to great comedic effect and had the audience in stitches.
The performance was enhanced by the creative use of props in the absence of the stage sets. Particularly effective was the transformation of a shade- less standard lamp into a magnificent lighthouse.
Shortly before the interval, Holmes discovered that the fabled Satsuma Stone, stolen from the crown of William of Orange and only recently discovered in a midden in Maastricht, had disappeared during the performance. The stone had been entrusted to him by the Queen for safe passage to the Tower of London. This immediately threw every member of the audience under suspicion and gave Watson the excuse to watch over the audience during the interval and try to prevent them from leaving the room. The hysterical dialogue with Jackie Barlow as she tried to make her way to the ladies was an unexpected high point. The second act was slightly more serious than the first and much of the action took place against the backdrop of the Reichenbach Falls (three kitchen chairs). There was a neat twist at the end, which put a completely different and original perspective on the fate of Moriarty after his fight with Holmes at the Falls.
Holmes was played by Julian Finnigan and Watson by Dominic Goodwin (regular village hall patrons will remember Dominic's appearance in ‘The Lost World', which was the first live theatre production - and the first event ever- in the new village hall on 14th January 2014). Both actors played their parts with energy, skill and real enthusiasm with superb comic timing, which made for a very enjoyable and memorable evening.
Philip Hewitson