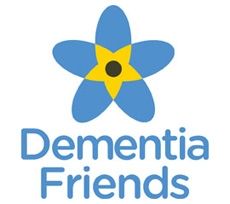 As part of the "Club as the Hub" program, the Village Hall Committee arranged a meeting in the village hall to raise awareness of Dementia in local communities. The aim was to learn some of the ways we can help people living with the condition. The course was run by Dementia Friends, who's aim is to help create communities in which people living with dementia feel more understood and included.

Over 16 people attended; a mix of volunteers who run many of the activities at the village hall such as Primetime, Film Club and Zumba, and representatives from local groups who attend these groups or use the facility. Dementia touches the lives of millions of people across the UK and many of the attendees had their own experiences to share. It was an extremely well run course which was well received by all.

Dementia Friends was launched to tackle the stigma and lack of understanding that means many people with the condition experience loneliness and social exclusion. There is a growing need to create more communities and businesses that are dementia friendly so that people affected by dementia feel understood and included. Alzheimer's Society's Dementia Friends programme is their biggest ever initiative to change people's perceptions of dementia. As part of Alzheimer's Society's long-term commitment to help more communities and businesses become dementia-friendly, a new target of creating four million Dementia Friends by 2020 has been set. Husthwaite Village Hall, its volunteers and friends, have taken their first step on this path as part of our committment to the local community.

If you are interested in becoming a Dementia Friend or want to learn more, please let either Robin Walton or myself know.