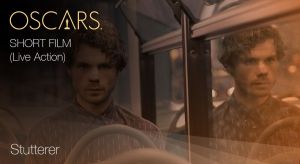 Award winning short films at Husthwaite Film Club
Husthwaite Film Club held its first short film festival on Thursday 16th June in the Village Hall with local guest speakers representing two award winning short films from 2016.
A mix of six short films were shown to an enthusiastic audience, all carefully selected to give a mix of genres and themes. We were especially pleased to welcome two guests to talk about our main award winning features, both with local Husthwaite connections!
Calum Mowatt introduced the first of these, "Russian Dolls", the first short film made by the Edinburgh based Production Company "Neon Eye". Calum founded Neon Eye in 2015, and spoke of his frustration at the lack of opportunity for young film makers who want to showcase their creative talents. Calum was also the inspiration that started the Husthwaite Film Club before leaving to go to Edinburgh University. Russian Dolls was the winner of Best Performance in Glasgow's First Act Film awards earlier this year.
Our second and main feature of the evening was "Stutterer", the Short Film Oscar winner of 2016. The film was introduced by Guy Armitage, another Husthwaite resident and brother of Serena Armitage, the Producer of the Oscar winner. Guy gave an amusing and inspiring account of the making of the very low budget "Stutterer" (by Hollywood standards), funded in part by the Director renting out his room. Guy also gave us a taste of Serena's Oscar ceremony experience including inadvertently turning down a selfie with Mark Ruffalo!
A very successful evening and one where the decision to make this an annual event was most definitely agreed!
Thanks to Husthwaite Film Club and to Guy and Calum in particular.
Over the years, Husthwaite film club has developed a healthy membership and meets the 3rd Thursday of every month to watch an eclectic mix of screenings. New members are always welcome! For more details contact Sheila on 868196.