The village hall committee organised a special afternoon tea in the hall to celebrate the queen's 90th birthday.

The hall was decorated with the flags of the union and tables were laid out.
These were filled to the tune of 103 as the village came out in force to enjoy the celebrations. The age ranged from babies to celebrated veterans of the Second World War and all demolished a wide variety of cakes and scones. Entry was free as were the refreshments, all provided by volunteers.

The Dishforth Military Wives' Choir provided entertainment. Founded in 1912 it is not unfair to say they have graced larger venues than our Hall but they did not seem out of place.
Their repertoire consisted of a variety of songs but two medleys stood out in particular.
One was a reprise of ABBA songs that had feet tapping and one of Vera Lynn that resonated with a large part of the audience who tentatively joined in. 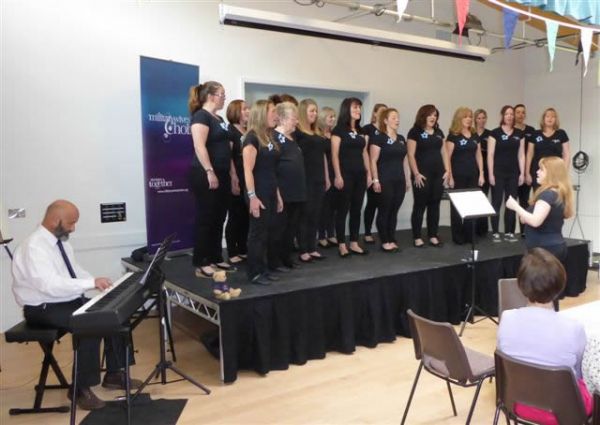 ‘Swing Low Sweet Chariot" whilst the other sang ‘When the Saint's go marching in'
The choir sang something else but we drowned them out so I was not sure what their tune was.
What added to the performance was that a different member of the choir introduced each song.
They told us something about themselves in addition and this made us think of their partner's sacrifices and how difficult it was to be a military wife.

The performance ended with a rendition of "Bring Him Home' from Les Miserables. There were tears from the choir and the audience

The poignant atmosphere was reminiscent of an age we thought was long gone. Some of the older generation remembered it and the younger got a real sense how how things were.

Sheila Mowatt, who helped organise the event on behalf of the Events team and Village Hall would like to give special thanks to the community committee; Annabel, Richard, Linda, Juliet and Margaret. To Angela & the History Society for the wonderful exhibition and then to all the Husthwaite volunteer cake bakers, tea makers, scone butterers, tea servers & washer uppers....a fantastic team effort, thank you!

And of course, the Military Wives, there were a few tears on that last song "Bring him home".. :-)

More pictures of the event can be seen here.