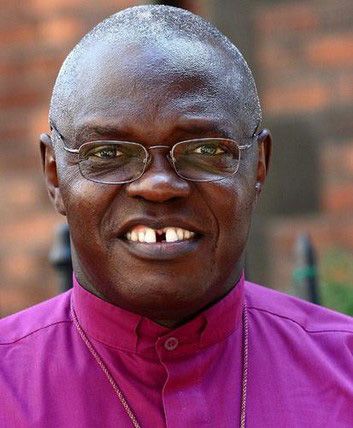 The morning of Tuesday 3rd May saw the arrival of John Sentamu, Archbishop of York at the doors of St Nicholas Church here in Husthwaite. This was the beginning of the penultimate week of his Pilgrimage of Prayer, Witness and Blessing in the Diocese of York, starting on December 1st at St Mary's, Whitby and finishing in York Minster on May 22nd.

At Husthwaite the Archbishop first led an early morning congregation in a short service of prayers before moving on to visit and meet the staff and children the Church of England Primary School at the bottom of Low Street. Then it was up to the Village Hall where a party of keen walkers were assembled, ready to join him as his journey took him over the fields and side roads to Oulston.

The pace set by the Archbishop meant we were a little early for lunch, but were nevertheless treated to warming drinks of tea or coffee whilst we waited in the sunshine outside Oulston Village Hall. Once inside we enjoyed a welcome and tasty bowl of Soup before being joined by more walkers ready for the next leg from Oulston to Crayke, the Husthwaite contingent returning home once again down to Garbutt's Gill and back across the fields.

The side picture here shows the Archbishop and some of the congregation in front of our recently installed porch doors. More pictures can be seen here and will be added to as more become available.